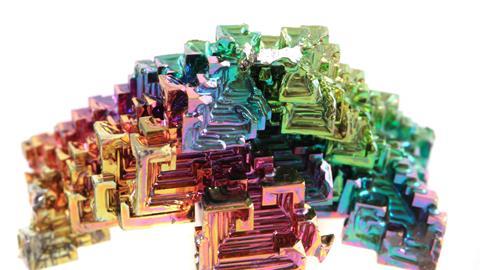 Bismuth superconductor leaves theory up in the air

Pure bismuth is a superconductor at extremely low temperatures. The material isn’t typically known for its ability to conduct electricity, but this discovery by researchers in India may force a rethink on the very nature of superconductivity itself.

Superconducting materials, from niobium–titanium alloys to vanadium, have revolutionised modern society. Found in MRI scanners, mass spectrometers and particle accelerators, they can generate huge currents and magnetic fields with virtually no resistance when cooled.

But some materials are more amenable to superconductivity than others – bismuth is not one of them. ‘In general, compounds that exhibit superconductivity have roughly one mobile electron per atom,’ explains Srinivasan Ramakrishnan from the Tata Institute of Fundamental Research in Mumbai. ‘However, in bismuth, one mobile electron is shared by 100,000 atoms – since [the] carrier density is so small, people did not believe bismuth will superconduct.’

That did not stop researchers from trying to find out though. Over the past 50 years, some groups have observed superconductivity in amorphous or impure bismuth at high pressures. Only this week, one team reported that a honeycomb-like bismuth structure can readily switch between being an insulator and superconductor under the right conditions. But superconductivity in pure, bulk bismuth at ambient pressures has proven elusive.

Ramakrishnan’s group has finally discovered it using an elaborate array of coils, loops and sensors. The team first pushed single bismuth crystals into holes made along the length of a silver rod and encased it in a cylindrical magnetic shield. Within the shield sits a coil of niobium wire used to pass a magnetic field over the bismuth. Sensors within the cylinder can pick up changes in the magnetic field down to 10-18 Tesla – 13 orders of magnitude smaller than the Earth’s own magnetic field.

‘There are one or two other systems with very low electron carrier density which become superconducting – these have always been seen as a bit of an exception,’ remarks James Arnett, head of physics at the University of Bristol, UK, and a superconductor expert. ‘It would be interesting to see if this is part of a broader class of low carrier density superconducting materials.