UK researchers have shown that it is possible to detect trace quantities of drug metabolites in fingerprints. The finding could allow forensic scientists not only to obtain information about a suspect’s identity from the print, but also to elicit ’lifestyle intelligence’ on the individual. The technique could also be used to detect illicit substances in other cases, such as performance-enhancing drugs used by athletes, or people in the workplace who might be under the influence of drugs. 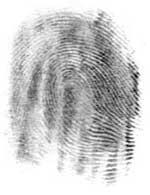 Every fingerprint tells a story

Richard Leggett and colleagues from the University of East Anglia and King’s College London focused on the sweat that is excreted through pores on the ridges of skin on the tips of the finger. When a finger comes into contact with a surface, sweat is deposited. Sweat contains a range of chemical species derived from the body, including metabolites of drugs.

The researchers developed a system capable of detecting trace quantities of cotinine, a metabolite of nicotine, present in sweat residues on fingerprints. They did this by attaching anti-cotinine antibodies to gold nanoparticles via a protein link. They then took fingerprints of volunteers who smoked, treated the fingerprint with the antibody-gold conjugate and washed it off. Fluorescence images were taken of the fingerprints, with the pattern of the fluorescence following the curves and whorls of the finger’s ridges, indicating that the antibodies had bound to the cotinine present on the print. In a control experiment with non-smokers, the conjugate did not bind to the fingerprint.

The system therefore would allow simultaneous recording of both the fingerprint pattern itself and the presence of the nicotine metabolite.

’The potential applications of this methodology are enormous as the functionalisation of the nanoparticles with other antibodies enabling the specific detection of numerous antigens within a fingerprint is possible,’ the researchers say. ’Such applications would include illicit drug detection and medical diagnostics as examples in which a simple but rapid screening method in conjunction with confirmatory identification of an individual are essential.’