Researchers in the US have devised a new way to predict ’off-target’ effects for pharmaceutical drugs. While drugs are usually intended to be selective for a single protein target, it is known that many can affect other proteins, a phenomenon called polypharmacology. Off-target interactions can cause potentially harmful side-effects, or in some cases an effect on an unintended target might suggest new uses for an existing drug to treat alternative conditions. 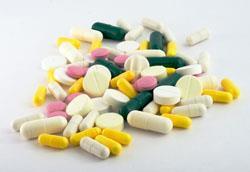 Identifying these off-target effects has proved difficult, time-consuming and costly. Now, a team led by Brian Shoichet of the University of California San Francisco has combined powerful computational, statistical and experimental techniques to predict off-target interactions.

On one side the researchers lined up 3,665 existing and experimental drugs. On the other side they assembled over 65,000 known ligands to protein receptors in the body, arranging the ligands into around 250 classes depending on the type of receptor they bind to. They then used chemoinformatics and statistical programs to identify similarities between the drugs and the set of known ligands.

’We define ligands by their topologies - atoms, functional groups, and the bonds between them,’ says Shoichet. ’There are subtle features whose importance only appears on considering the full set, or a large part of it, of the known ligands.  Hence the focus on comparing drugs to the full ’ensemble’ of the known ligands.’ A second important nuance, Shoichet goes on to explain, is that all comparisons are corrected for the similarity one would expect at random. ’This allows us to give statistical weights on the similarities we would observe. This is essentially new to the field of making chemical comparisons, though it is widely used in biology - from where we stole it.’

The exhaustive survey yielded hundreds of previously unrecognised possible interactions between drugs and protein receptors in the body. A number of these were confirmed by experiments in the laboratory, including the identification of the key receptor that binds the hallucinatory drug dimethyltryptamine - something that has been hotly debated recently.

"It would be a tremendous opportunity if we were to find a new way forward for a compound that we previously had reason to shelve" - Kris Matykiewicz, AstraZeneca

Shoichet says that the approach is important in understanding and predicting side effects, and for finding new disease indications for established drugs.  ’Because drugs are special molecules, really hard to develop and very thin on the ground, finding new uses for those that already exist would be a great help for drug development and human health.’

Andrew Hopkins, an expert on polypharmacology from the University of Dundee in the UK, says, ’This is a landmark paper as it shows the emerging power of chemoinformatics when connected to excellent experimentalists and applied to an important problem, i.e. predicting drug off-targets and polypharmacology.’

The work should also prove valuable to pharmaceutical companies, working to expand their drug pipelines and the get the most from their existing compounds.  ’New computational techniques to systematically identify off-target receptor activity for investigational compounds are certainly of interest,’ says Kris Matykiewicz of pharmaceutical firm AstraZeneca. ’Such approaches have the potential to deliver real commercial value if they can increase the probability of success, or help avoid unanticipated adverse events. It would be a tremendous opportunity if we were to find a new way forward for a ’parked’ project or a compound that we previously had reason to shelve.’