Films of carbon nanotube bracelets showing their response over time to an external trigger have been recorded enabling greater understanding of not only their 3D structure, but of how they react and move over time.

Scientists have been using electron tomography - a technique for obtaining detailed static 3D structures of molecules - for some time. However, the technique gives no information on how a molecule responds after a reaction has taken place. 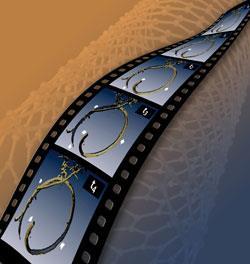 Researchers at the California Institute of Technology have taken electron tomography into the fourth dimension by observing the 3D dynamics of carbon nanotubes over time after exposure to pulses of heat from a laser. The technique is very fast, enabling nanometre scale molecular movement to be recorded on the femtosecond timescale.

They constructed tomographs from nearly 4000 projections taken from a whole series of angles and times and displayed them as a movie showing the mechanical motions and shape changes of the molecules. The research is reported in Science  (DOI: 10.1126science.1190470).

A mild and effective method for coupling trifluoromethyl groups onto aryl rings has been developed by US chemists. The process should be especially useful in medicinal chemistry and agrochemical development where the use of fluorine is increasing.

Fluorination of organic molecules can have drastic effects on their properties, changing their solubility and polarity, and in drug molecules, how well they are absorbed by the body and how resistant they are to metabolism. However, reliable methods to add fluorine - particularly CF3 groups - to aromatic rings are lacking.

Now, researchers have developed a catalytic system that can substitute aryl chlorides for CF3 groups. Using aryl chlorides rather than bromides, iodides or triflates drastically expands the scope of the method, because there is a much wider range available. This research is published in Science  (DOI: 10.1126/science.1190524).

Keeping the heat up for better solar cells

US scientists have found a way to capture the ’hot’ electrons that are responsible for much of the energy lost in current solar cells. This could lead to photovoltaic materials with efficiencies of up to 66 per cent, they say.

In current silicon solar cells, around a third of the energy that hits the cell is converted into electricity. Much of the energy is lost as heat and so-called hot electrons are generated, which cool rapidly and cannot easily be put to good use.

Now, a team from the University of Texas has used a combination of nanomaterials and titanium dioxide to capture the hot electrons. They deposited semiconducting lead selenide nanocrystals on titanium dioxide, an electron conductor, and used optical second harmonic generation to study the hot electrons moving across the interface between the two materials. This work is reported in  Science  (DOI: 10.1126/science. 1185509).

Tuition fees for university students in the UK could be scrapped, according to proposals put forward by business secretary Vince Cable.

Instead fees could be replaced by a ’graduate tax’, where a proportion of students’ future earnings are paid back into the higher education system for a set period of time.

In his first major speech on universities since his appointment on 12 May, Cable said that the tax system would be fairer than the current fees arrangement because individual contributions would be linked to their salary post-degree. ’It surely can’t be right that a teacher or care worker or research scientist is expected to pay the same as a top commercial lawyer or surgeon or city analyst whose graduate premium is so much bigger,’ he said during his speech.

Lord Browne has been asked to consider this idea as part of his review of university fees, the outcome of which is due in the autumn.

Chemists looking at solid amine materials to capture carbon dioxide from industrial flue gases need to pay more attention to how the gas will be removed and the amines regenerated in a practical setting, say US researchers. Using steam to strip out absorbed CO2 could be much more practical than the current practice of flushing with inert gases like nitrogen.

Carbon capture and storage is one part of a general strategy for reducing CO2 emissions, with current pilot-scale projects using aqueous amine solutions. Researchers have started to move towards cheaper, more efficient solid adsorbent materials instead, with little consideration so far for the regeneration process.

Publishing in ChemSusChem  (DOI: 10.1002/cssc.201000131), the team showed that all three common classes of solid-supported amine materials could stand up to three cycles of steam-stripping treatment, providing a starting point for this approach.

Environmental policy has played a part in the ousting of Australia’s prime minister, Kevin Rudd. On 9 July, Julia Gillard replaced Rudd after a surprise leadership vote, following the country losing confidence in the ruling party when key environmental legislation plans were shelved.

The emissions trading scheme was one of the government’s main policy initiatives, designed to help Australia meet its greenhouse gas emission target of 5-25 per cent on 2000 levels by 2020. But after hitting a number of hurdles, it was announced in April that the plans would be delayed until at least 2013 (see Chemistry World, June 2010, p12). The opposition party’s determination to block the legislation and slow international progress on a new climate change deal was blamed for the delay. 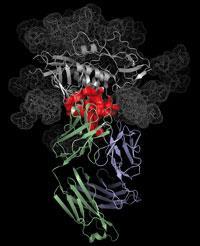 New antibodies against HIV that could point the way to an effective vaccine against the virus have been identified by US scientists. These cross-reactive broadly neutralising antibodies bound to and neutralised more than 90 per cent of the HIV strains they were tested against.

The team, based at the National Institute of Allergy and Infectious Diseases in Bethesda, had previously recognised that some HIV infected individuals make very potent and cross-reactive antibodies to the virus. Now, they have designed probes to isolate the HIV-specific B-cells that make these antibodies and then recovered the antibodies from the cells using a single-cell polymerase chain reaction-based amplification technique.

The scientists have also determined the crystal structure of one of these antibodies while it is complexed to the HIV envelope protein. According to the team, the next step is to take this structural knowledge of the antibody and develop a vaccine that elicits this type of antibody in a vaccinated volunteer.

The EU plans to allow individual countries in Europe the freedom to decide whether or not to grow genetically modified (GM) crops on their territory.

Currently authorisation licences for cultivating GM crops are valid across the whole of the EU, making it difficult for individual countries who wish to ban them at a national level to do so. This has resulted in ongoing battles between the EU and anti-GM countries such as Italy and Austria.

Under the proposals, crops would still have to be approved by the EU on health and environmental grounds - but then it would be up to individual countries to decide whether to allow them to be grown at a national level.

Before the new rules can come into effect they must be agreed by all 27 European governments and the European parliament.

A major supplier of medical isotopes is coming back online after more than a year of being shut for unplanned repairs - a move that should relieve current shortages.

Prior to its shutdown in May 2009, the reactor (in Chalk River, Ontario, Canada) was estimated to supply 60 per cent of the isotopes used in diagnostic imaging and medical treatment in the US. By November concerns were growing about an urgent lack of supply globally (see Chemistry World, January 2010, p7).

On 7 July it was announced that the Canadian Nuclear Safety Commission had authorised the refuelling of the reactor, meaning it should start producing isotopes again by the end of July.

Movies of molecules in 4D

Keeping the heat up for super-efficient solar cells

Stripping down the carbon storage problem

Chemists looking at materials to capture carbon dioxide need to pay attention to practically regenerating them once full. Could steam be the answer?