A sensor to determine the strength of garlic for the food industry has been developed by UK scientists.

Garlic is widely used to flavour food but varies in strength depending on the species, crop or where it is sourced from. Monitoring the strength of garlic purees for use in foods is done by human tasters but this is slow and neither reliable nor convenient. 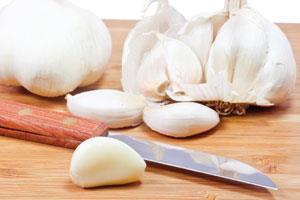 The more diallylsulfides, the stronger the garlic flavour

The sensor reported in Analyst (DOI: 10.1039/c0an00706d) works by suspending garlic puree samples in a solution containing bromide ions. The solution is analysed voltammetrically whereby electrogenerated bromine reacts with diallylsulfides to regenerate bromide. This results in an increase in peak current, which quantifies the response.

The selectivity arises since the timescale of voltammetric measurements is much shorter than that of conventional synthetic chemistry, so that the bromine has time to react with the disulfide bonds but not enough to add to the carbon-carbon bonds.

Metallic glass as tough as steel

A metallic glass with a combined strength and toughness that exceeds that of any other material has been developed by researchers in the US.

Metallic glasses are made from metals but, in contrast to normal metals, their structure is not crystalline making them brittle similar to the glass in windows. They are known to be very strong, but once they fail and cracks appears, they will shatter.

A team led by Marios Demetriou at the California Institute of Technology, has incorporated great strength and toughness in a metallic glass made from 90 per cent palladium, 3 per cent silver, and the remaining 7 per cent from germanium, silicon and phosphorus.

The material published in Nature Materials (DOI: 10.1038/nmat2930) deforms rather than breaking under stress and therefore can stop cracks spreading.

In two separate initiatives, the US and Sweden are to invest millions in biofuel research projects. The US Department of Energy (DOE) is pledging $30 million (?18.9 million) for the development of advanced biofuels projects in order to grow America’s clean energy economy. Up to five successful small-scale integration projects will share the money over the next three to four years. It is hoped the projects will provide fuels to replace petrol or diesel without costly changes to vehicles or fuelling infrastructure.

In contrast, the European Commission has supported Sweden’s plan to give SEK222 million (?20 million) to just one project, managed by G?teborg Energi AB - an energy company. The money will be used to develop a pre-commercial demonstration plant for the gasification of forest raw material into biomethane.

The red mud accident in October 2010 contaminated a vast area with caustic saline red mud (pH 12). A team led by Erik Smolders from the Catholic University in Leuven collected samples of the red soil mud and used it to grow barley in the laboratory.

The researchers report in Environment Science & Technology  (DOI: 10.1021/es104000m) that the red mud boosted the copper, chromium, iron and nickel concentrations in the barley, but these did not exceed toxic levels or stunt growth. The team concludes that Na salinity, and not the trace metal contamination, is the main concern for this red mud in soil.

Nigerian authorities should prevent further lead poisoning in northern Nigeria from the processing of lead-rich ore for gold extraction, says a UN report.

Over 18 000 people have been affected by lead poisoning and 200 children have reportedly died as a result since the beginning of 2010.

The report by the United Nations Office for the Coordination of Humanitarian Affairs and the United Nations Environment Programme recommends that greater measures to limit ore processing near water sources where humans drink are needed, and that lead-polluted villages should be cleaned up to ensure that children suffering from lead poisoning can return to their villages for recovery.

The report is based on findings of a sampling and analysis mission requested by the Federal Ministry of Health of Nigeria in September 2010.

Flexible particles, resembling red blood cells in size and shape that can stretch and fold, stay in circulation in the blood longer than rigid particles, according to researchers in the US.

Research into particles that circulate in the blood long enough to deliver drugs has so far only focused on size and shape. Now a team led by Joseph DeSimone at the University of North Carolina synthesised flexible hydrogel polymer particles with tunable elasticity that resemble mouse red blood cells.

The team, reporting in Proceedings of the National Academy of Sciences USA (DOI: 10.1073/pnas.1010013108), found that after injecting the particles into live animals and artificial devices, the most flexible particles stayed in circulation for several days, whereas rigid particles were quickly trapped in the lungs and other organs.

The mechanism by which antibacterial hydrophobic polycationic coatings kill the influenza A virus has been uncovered by researchers in the US.

Influenza spreads around the world in seasonal epidemics affecting birds and mammals and can kill up to half a million people every year. New strains of the virus occur when a human strain picks up genes from a virus that infects birds or pigs. In addition to vaccines and drugs, biocides used as coatings on surfaces can be applied to inactivate the virus. 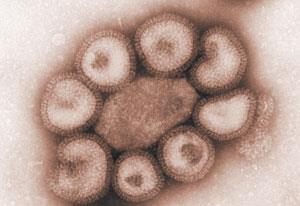 Seasonal epidemics of influenza can kill up to 500?000 people a year

A team at the Massachusetts Institute of Technology, in Cambridge, has demonstrated that upon contact with N,N  -dodecyl methyl-polyethylenimine coatings, aqueous solutions of influenza A viruses (including human and avian strains) are completely disinfected, which correlates with a disappearance of viral proteins.

Reporting in Proceedings of the National Academy of Sciences USA  (DOI: 10.1073/pnas.1017012108) the team used scanning electron microscopy to show that the viral particles in the aqueous solutions irreversibly adhere to the hydrophobic polycationic coating. The coating then causes disintegration (including RNA release) and inactivation of the adhered viruses.

Converting drugs from one crystalline form to another can be achieved by exposure to elevated levels of carbon dioxide, say researchers in the US.

Drugs can exist in many crystalline forms known as polymorphs. Polymorphs of the same compound can have very different solubility, stability and compatibility, but transforming compounds between polymorphs can be time consuming.

A team at the University of Missouri, Columbia, has now converted the antibiotic clarithromycin between two polymorphs by pressurising clarithromycin crystals with CO2 for four hours at room temperature - conventional methods take 18 hours at high temperatures. Similarly, they were able to convert the ethanol hydrate of the drug lansoprazole to the solvent free form that is used commercially.

The DOE has released its critical materials strategy that examines the role of rare earth metals in the clean energy economy.

The DOE is now working with federal agencies, Congress and international partners, to develop an integrated research agenda on critical materials.

A sensor to gauge garlic strength for the food industry