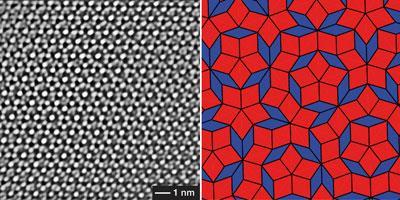 Quasicrystals are frequently compared to the Penrose tile pattern

A rare form of solid - a quasicrystal - has been discovered in a rock sample from Russia’s Koryak mountains, the first time such materials have been found in nature. The discovery could expand our understanding of how quasicrystals form and potentially lead to new applications, claims the US team who discovered the material.

Quasicrystals have structures in between those of crystals and glasses. They are often compared to Penrose tilings, where two different shapes of tile are tessellated in patterns with local symmetry but more complex overall periodicity.

The materials have interesting properties, often being harder or tougher than their crystalline counterparts, and having low surface friction or unusual optical behaviour.

The team, led by Paul Steinhardt at Princeton University, started its hunt for natural quasicrystals about 10 years ago using a self-developed computer algorithm to search in existing catalogues of powder x-ray diffraction patterns. The researchers were starting to despair when they finally hit lucky with a sample that contained a mixture of minerals, including tiny grains with a composition similar to known quasicrystals of aluminium, copper and iron. The research is reported in Science  (DOI: 10.1126/science.1170827).

Common table salt - normally a brittle crystalline material - can be pulled into nanowires, US researchers have found.

The team watched the behaviour of salt using an interfacial force microscope and saw that the wires can be extended by more than twice their original length before breaking. The wires can also be compressed back into the crystal, but do tend to bend and buckle.

Publishing in Nano Letters  (DOI: 10.1021/nl9004805), the team say that part of the cause of this unusual superplasticity could be down to the microscope itself, so it isn’t yet known if this could be occurring in nature.

The hotly debated plans for a metrics system - based on counting publications, citations, and so on - to take over from peer review in the revamped UK research assessment exercise are being further scaled back.

After running pilots of the new system, called the Research excellence framework (REF), the Higher education funding council for England (Hefce) has released a report announcing that ’bibliometrics are not sufficiently mature to be used formulaically or to replace expert review.’ Instead it plans to revert to the traditional peer review system, using citation indicators to inform assessment panels where possible.

A compound containing a highly strained three-carbon ring has been found to be the toxic culprit in a poisonous Asian mushroom.

Japanese researchers studying the mushroom Russula subnigricans  isolated cycloprop-2-ene carboxylic acid - an unstable molecule that has never been seen in nature before - and showed that it is fatal in mice.

Ingestion of this mushroom causes rhabdomyolysis, the rapid breakdown of muscle fibres eventually leading to kidney failure and death. Publishing in Nature Chemical Biology  (DOI: 10.1038/nchembio.179), the researchers say that they hope to identify the biochemical reactions triggered by the compound, which may lead to better treatment for people who have eaten the mushroom.

The Australian government has surprised the science community with a major increase in spending on science and innovation in its 2009 budget, despite tough economic conditions.

The 2009-10 spending on science and innovation will be Aus$8.6 billion (?4.3 billion), 25 per cent up on the previous year, with additional funding worth Aus$5.7 billion over four years for higher education.

A total of Aus$1.1 billion is being spent on the super science initiative to boost areas such as space, astronomy, marine and climate. The bulk of this spending is for infrastructure. A further Aus$4.5 billion will go to the clean energy initiative to support the growth of clean energy generation and new technologies, and to reduce carbon emissions.

Element 112 gets the nod

The International union of pure and applied chemistry (Iupac) has officially credited the team of Sigurd Hofmann at the Institute for heavy ion research in Darmstadt, Germany, with the discovery of element number 112. With a relative mass of 277, it is the heaviest element yet to be officially recognised.

Atoms of element 112 were first observed by the team in 1996, but it has taken a long time for the work to be repeated and thoroughly verified.

They now have the honour of proposing a name for the newly-ratified element, although their suggestion will have to be assessed and approved by Iupac, which could take up to six months.

Nobel laureates have issued a memorandum calling for a global deal on climate change. This statement, formulated at an event hosted by the UK’s Prince of Wales in London in May, is aimed at the political leaders attending the UN Climate change conference being held in Copenhagen in December.

The overarching message from the group of 19 laureates involved is that action needs to be taken now. They also stipulated a number of elements that should be included in the global agreement, including confining the earth’s temperature rise to 2?C and adding that this can only be achieved by a 50 per cent emission reduction on 1990 levels by 2050. The group also urged developed countries to commit to a significant increase in investments for a low carbon energy infrastructure.

Changing a single amino acid in botulinum toxin A - the active ingredient in Botox - causes it to target non-neuronal signalling proteins, potentially widening the neurotoxin’s therapeutic applications, say US scientists.

The group at the Medical College of Wisconsin focused their studies on the part of the toxin usually responsible for cleaving neuronal signalling protein SNAP25. This cleavage blocks the release of neurotransmitters from nerve cells, causing local paralysis - hence its current use as a way to decrease the appearance of wrinkles, as well as various medical applications.

They found that making changes to a single amino acid in this part of the toxin meant that it could be used to cleave a related protein, SNAP23, which promotes mucus secretion. Publishing in Proceedings of the National Academy of Sciences USA  (DOI: 10.1073/pnas.0903111106), the team says that this could lead to therapies for oversecretion-related diseases such as asthma and chronic obstructive pulmonary disease, where excessive mucus builds up in the lungs.

Different colours can be generated by adjusting UV exposure time

Self-erasing colour images that can be programmed to last from seconds to hours have been developed by chemists in the US. The films are ’written’ with ultraviolet light and erased with visible light, and could be used for top-secret documents or self-expiring bus tickets, says the team.

To make the materials, gold and silver nanoparticles are coated with azobenzene molecules, and then embedded into thin films. When exposed to UV light, the azobenzenes isomerise and acquire electric dipoles that cause the photoactive particles to assemble together and take on a new colour. In an absence of UV light the particles revert to their original symmetry, and the colour disappears.

The exact colour of the exposed films depends on the amount of UV exposure they receive, and by altering the number of azobenzenes the erasing times can be programmed for different purposes. These findings are published in Angewandte Chemie International Edition  (DOI: 10.1002/anie.200901119).