Protein fragments from a duck-billed dinosaur, known as Brachylophosaurus canadensis,  which died 80 million years ago, have been found by US researchers. 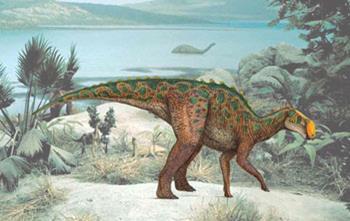 Collagen protein has been found in a duck-billed dinosaur fossil

The findings support controversial claims made two years ago by the same scientists, at North Carolina State University in Raleigh, that protein fragments had been found in a 68 million year old fossil of a Tyrannosaurus rex  (see Chemistry World,  May 2007, p9). These claims were disputed by other palaeontologists because it was previously thought that soft tissue decays quickly after death.

The team examined a single thigh bone from the hind limb of a dinosaur that had been dug up in 2007 from under seven metres of sandstone in Montana, US, and crucially then kept away from potential contamination from newer proteins. Using mass spectrometry the team identified the sequence of amino acids in the fragments of collagen - the principal protein in connective tissue - that they had found.

Publishing in Science  (DOI: 10.1126/science.1165069) the team say that the amino acid sequences they found resemble those of the T. rex  - and also modern day chickens and ostriches, adding further support to fossil evidence that birds are descendents of dinosaurs.

Solar cells could work in tandem

Researchers in Sweden have more than doubled the efficiency of light-harvesting cathodes for dye-based solar cells (DSSC). The team say their system could be combined with more traditional anode-based devices to build tandem solar cells, potentially creating a much more efficient solar cell than those currently available.

In typical DSSCs, light energy is harvested by a dye which passes electrons to an n-type semiconductor coating the anode. Recently a team from the Royal Institute of Technology in Stockholm introduced the reverse type of solar cell where dyes interact with p-type semiconductors at a light-harvesting cathode.

Publishing in Advanced Materials  (DOI: 10.1002/adma.200802461) the team now report a series of modifications that have allowed them to improve the incident photon to current conversion efficiency of these p-type DSSC devices to above 44 per cent.

The Australian government has delayed the start of its proposed carbon emissions trading scheme by a year, in a bid to ease pressure on companies during the global financial crisis. It has also introduced the possibility of tougher reduction targets.

The emission targets of this scheme, now due to start in July 2011, will depend on the outcome of the UN climate change talks being held in Copenhagen in December. If the world agrees to stabilise levels of carbon dioxide in the atmosphere at 450 parts per million or less by 2050, the Australian government will commit to a reduction of 25 per cent on 2000 levels by 2020.

If the ambitious global target is not agreed, the government will revert to its previously announced targets of a 5 per cent reduction, rising to 15 per cent if there is global agreement for a substantial
cut in emissions.

The lifetime of the lipid membranes that are typically used to study ion channels have been significantly increased, opening up the possibility of using them for drug screening.

A US-based team have found that polymerising synthetic lipids can increase the lifetime of suspended phospholipid bilayers from a matter of hours to three weeks.

Up to now the instability of these membranes has limited their use. Publishing in the Journal of the American Chemical Society  (DOI: 10.1021/ja901442t) the researchers say that drug screening for large pharmaceutical companies is likely to be the main application for these longer lasting membranes, with lots of small molecules screened to see if they activate ion channels embedded within them.

Ion channels are important therapeutic targets in diseases such as diabetes and Alzheimer’s disease.

ChemSpider, the open-access online database of structure-searchable chemical information, has been acquired by the Royal Society of Chemistry. The RSC says it hopes the move will enable ChemSpider to expand in scope to become a primary resource for web-based chemistry data.

The RSC’s acquisition of ChemSpider builds on an existing partnership between the two organisations. In 2008 this collaboration saw the launch of a online resolver for IUPAC’s International Chemical Identifier (InChI) and its more streamlined cousin, the InChIKey (see Chemistry World, February 2008, p10), which allow chemical structures to be represented by strings of text. ChemSpider takes advantage of these systems to enable chemists to easily search structure-based chemical data.

The RSC says the ChemSpider website will be re-launched later in the year and will be expanded to take advantage of opportunities for enhanced services.

A new type of molecule, predicted by theory but never previously seen, has been made by German scientists. Consisting of two gaseous rubidium atoms, the molecule exists for just 18 microseconds at three millionths of a degree above absolute zero.

The two atoms, one in a highly excited - Rydberg - state and the other in the ground state, are held together by a very weak bond. The atom in the Rydberg state has one very distant electron, which interacts with the second atom. This electron pulls the ground state atom towards the Rydberg atom so that it doesn’t escape, forming the 100 nanometre long ’bond’. These findings are published in Nature  (DOI: 10.1038/nature07945).

A self-assembling cage designed to selectively recognise sulfate anions has been made by US chemists. The team from Oak Ridge National Laboratory used computer software to design a molecular cage, incorporating six urea groups that provide the perfect hydrogen-bonding environment for the sulfate anion.

This gave them a receptor that can remove sulfate ions from aqueous solutions, which is particularly difficult because of their large hydration energy. The binding energy of their receptor is so strong that it rivals nature’s sulfate binding protein.

Publishing in Angewandte Chemie  (DOI: 10.1002/anie.200900108), the team say that a tweaked version of the sulfate cage could be used to improve nuclear waste processing. The software used by the group could also be applied to creating receptors for all sorts of molecules. 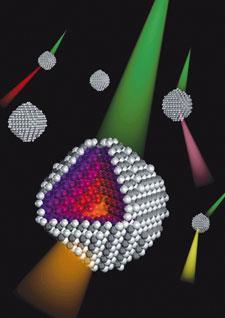 Source: © UNIVERSITY OF ROCHESTER, US

The nanocrystals have a smooth graduation from core to shell

The first semiconductor nanocrystals that do not intermittently ’blink’ while emitting light have been created by US researchers. The breakthrough may provide a new breed of nanocrystals for applications ranging from low-threshold lasers to brighter LED lighting.

Previous attempts to create continuously emitting light sources from individual nanocrystals hit problems, due to their tendency to dim or blink sporadically during operation. Scientists at the University of Rochester thought this might be caused by electrons getting trapped in defect sites between the core and shell layers.

Publishing in Nature  (DOI: 10.1038/nature08072), the team say they have solved this problem by making a nanocrystal that has a smooth graduation between its core and shell. They added a zinc-selenium shell to a cadmium-selenium core, and annealled the structure for several minutes so that the zinc gradually diffused inwards. Then they capped it with another shell of zinc-selenium.

In tests, these single CdZnSe nanocrystals exhibited photoluminescence continuously for periods ranging from milliseconds to hours.

The University of California, Los Angeles (UCLA) in the US has been fined nearly $32,000 (?21,340) following the death of a laboratory assistant in January.

In its 4 May report, the California Division of Occupational Safety and Health concluded that there are significant weaknesses in the UCLA Department of chemistry and biochemistry’s hazardous chemical training, workplace safety procedures and laboratory recordkeeping.

The fatal accident occurred in December 2008 when a 23-year-old researcher, Sheharbano Sangji, spilt highly flammable t-butyl lithium on herself (see Chemistry World, March 2009, p6). The report notes that Sangji was not wearing appropriate body protection at the time, and said that no records of relevant health and safety training for her had been found.

A campus-wide review of lab safety procedures at UCLA will now be conducted.