Japanese researchers have created a rapidly self-healing hydrogel material, composed of 98 per cent water, which they say could have applications in green chemistry.

The new material has three unique selling points: it is remarkably tough compared to other non-covalent hydrogels, when cut with a razor it sticks itself back together in around three seconds, and it is remarkably easy to make. 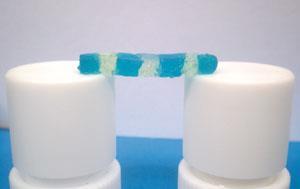 The strong hydrogel blocks can be strung together

Water and the ingredients that make up the remaining 2 per cent of the gel - sodium polyacrylate, a branched binder molecule (which is covered in guanidinium ions)and nanosheet-shaped clay - are simply mixed together and the gel forms in a few seconds.

The self-healing behaviour is a result of the anionic interactions between the positively charged guanidinium ions in the binder and the negatively charged oxyanions on the surface of the clay. Cutting the gel rips these ions apart, but if the freshly cut surfaces are pushed against each other straight away, the reverse process occurs and the oppositely charged ions stick back together.

The team say the gel can preserve biologically active proteins for catalysis, making it useful in green chemistry applications.

A route to scaling up DNA origami into larger structures by using ’tiles’ instead of ’staples’ to pin them in place, has been developed by US scientists. Scaling up is crucial for the further development of DNA origami, which has great potential in providing cheap access to complicated nanostructures.

DNA origami is made from long strands of viral DNA. To fold it up, traditionally short pieces of DNA act as staples or pins holding together the strands at specific points - using Watson-Crick base pairing.

Researchers at Arizona State University have developed an alternative method using rectangular-shaped DNA tiles (each of which was also made from DNA origami) as the pins, and have shown that they can make DNA origami four times the size of that possible with the previous technique.

The world’s fastest graphene-based transistor, the first to rival the speed of traditional silicon devices, has been made by IBM researchers in the US. This is a significant step towards the next-generation digital communication devices, they say.

Transistors are gates on electricity supplies used to amplify or switch the signal. Graphene (single atom thick layers of carbon atoms) is the thinnest electronic material and charge carriers can move through it very easily. It has therefore been long expected that it can be used to make transistors that can switch electronic signals faster than comparable silicon transistors - but this is the first evidence that these assumptions are true.

The European Research Council (ERC) president, Fotis Kafatos, stepped down from his position on 1 March.

The ERC was set up by EU three years ago to promote high-risk, high-gain ’frontier’ research. And the Greek immunogenomics expert was the founding president.

The ERC came under fire in 2009 when an independent review found that it was riddled with operational problems that put its long-term sustainability into question. This prompted a pledge by the European Commission to overhaul the agency’s procedures (see Chemistry World, December 2009, p7).

In the statement announcing his resignation, Kafotos said the presidential role was taking more of his time than he anticipated, and that he wanted to devote more of his efforts to his research work at Imperial College London in the UK.

Recent polls suggest the public in the UK and US are becoming increasingly sceptical about climate change.

The UK poll, commissioned by BBC News and conducted in early February, shows a marked increase in climate change scepticism compared to just a few months ago. The survey of 1001 adults indicated that 25 per cent of people do not believe that ’the Earth’s climate is changing and global warming taking place,’ compared with only 15 per cent of adults in November.

A report from the US Pew Research Center showed that a similar swing in opinion has occurred in the US recently. In October 2009, just 57 per cent of the 1500 people surveyed believed there was solid evidence that the Earth’s average temperature has been increasing over recent decades, down from 71 per cent in April 2008.

UK scientists have raised concerns that recent moves to ensure the independence of scientific advice in government may in fact further threaten the relationship between the two communities.

The issues were highlighted in a 7 February letter, signed by over 40 senior scientists, submitted to UK science minister Lord Drayson and government chief scientific adviser John Beddington. The correspondence, seen by Chemistry World, expresses discontent with changes made to proposed Principles for the Treatment of Independent Scientific Advice.

The original principles were drawn up by scientists following the controversial dismissal of scientific adviser David Nutt from the Advisory Council on the Misuse of Drugs in November last year (see Chemistry World, December 2009, p10). However, the set of principles released by the government for consultation contained key differences which senior scientists say are cause for grave concern.

Ambient light can trigger the self-assembly of semiconducting nanoparticles into spiral-shaped nanoribbons, US researchers have found. 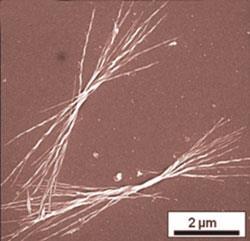 The slow oxidation of tellurium anions in CdTe nanoparticles - in the presence of a sulfur-containing surfactant - causes them to self-assemble into long flat ribbons made up of several layers of CdS/CdTe nanoparticles.

The team, based at the University of Michigan, found that illuminating the ribbons with ambient light caused them to twist. And through studying the twisting, they discovered that the process spontaneously occurs to reduce the mechanical sheer stress in the flat ribbons caused by the photooxidation of the CdS.

It was also observed that the ribbons twist to form equal number of left and right helices, and that the length of a complete twist (the pitch length) varies according to how long light is applied.

The researchers say that their method, published in Science  (DOI: 10.1126/science.1177218), offers a new approach for synthesising nanostructures and could prove useful in developing materials with novel optical, electronic and mechanical properties.

The US Department of Energy has ploughed $11.25 million (?7.2 million) into two projects to develop US-based supplies of molybdenum-99 - the precursor of technetium-99m, the most commonly used radioisotope in nuclear medicine diagnostic and treatment procedures.

Supplies of 99Mo have been running low since May 2009 (see Chemistry World, January 2010, p7) owing to problems with ageing reactors in Canada and the Netherlands. There is currently no US-based facility to supply this isotope.

The US appears to be losing its global lead in science and technology as emerging economies up their game, according to data released by the US National Science Foundation (NSF).

Data on the publication of scientific papers worldwide, included in the 2010 Science and Engineering Indicators  report, highlights some striking differences. The average annual growth rate in article publication between 1995 and 2007 in China was 17 per cent, but just 0.7 per cent in the US. Furthermore, the US share of the top 1 per cent of chemistry papers cited was over 51 per cent in 1998, but fell to 38 per cent by 2008. China meanwhile increased its share from 0.3 to 8.1 per cent in the same time period.