C02 affected clownfish don’t stay safe like this one

Why did little Nemo swim off from his school trip in the film Finding Nemo? Maybe it was because he’d had a hit of CO2. In Nature Climate Change (DOI: DOI:10.1038/nclimate135) Philip Munday and colleagues from James Cook University in Townsville, Queensland, Australia, report that carbon dioxide affects the GABA-A receptor in clownfish, leading to riskier behaviour.

The GABA gated ion channel uses both Cl- and HCO3- ions for conductance, so an increase in CO2 alters the distribution of the ions. The team suggest that these regulatory changes in HCO3- and Cl- levels during high-CO2 exposure render some GABA-A receptors excitatory, affecting behaviour.

This might just seem like an interesting finding, but the levels of CO2 used were the same as those predicted to happen in the near future due to emissions dissolving in the ocean. Given the wide presence of GABA-A receptors, this could cause behavioural problems for a wide range of marine species.

According to data published in Pediatrics (DOI: 10.1542/peds.2011-1218), many refugee children heading to the US from Burma may have dangerously high levels of lead in their blood. According to the researchers at the Centre for Disease Control, of 642 children tested 5% had lead poisoning, but the incidence was highest (14.5%) for children under two years old.

The researchers suggest that the poisoning comes from exposure in refugee camps. In many camps car batteries are used to generate power and many children, especially those under two, are likely to touch or ’mouth’ the batteries. However, anaemia, which makes children more vulnerable to lead poisoning, seems to be the biggest factor.

The team recommend that education is needed in refugee camps to warn families about the dangers of lead poisoning and that screening for anaemia be performed when children arrive in the US.

Investment in nanoscience for health

Over ?65 million has been awarded by the Engineering and Physical Sciences Research Council and the Technology Strategy Board to seven business-led projects aimed at developing therapeutic and diagnostic technologies that use nanotechnology. The aim is to make the UK an early competitive adopter of these technologies as well as supporting the commercialisation of ideas at their early stages.

This investment is part of a two stage initiative under the Nanoscience Through Engineering to Application Grand Challenge for Healthcare and the projects will be led by Critical Pharmaceuticals, Johnson Matthey, Mologic, Nanomerics, OJ-Bio, Renishaw Diagnostics and Sharp Laboratories of Europe.

DNA walker strides to the lights

DNA molecules are now able to enjoy a stroll in the sunshine, thanks to US and Chinese chemists who have developed the first light-powered DNA walker.

Up until now, synthetic DNA machines have mainly been powered by chemical reactions, but light offers the potential for a much greater degree of control, allowing these machines to be stopped and started on command.

The stumbling block has been finding a mechanism to convert light into movement. This is what Weihong Tan and his team at the University of Florida, US, have now come up with and it’s all based on the photolysis of disulfide bonds.

The walker begins its stroll by binding to the first pole: the long leg binding with the long section of the pole and the short leg binding with the short section. When light is shone on the DNA walker, its pyrene molecule cleaves the disulfide bond in the pole, causing the short section to detach and float away. The short leg of the walker then searches for another site to bind with, alighting on the next pole and pulling the long leg along with it.

The European Parliament has passed a new law to prevent the dumping of waste electrical and electronic equipment (WEEE), such as mobile phones and computers, in landfill sites. From 2019, member states will have to collect 65 tonnes of WEEE for every 100 tonnes of electrical goods sold in the last three years, or 85% of total WEEE generated. However, 10 states are given until 2021 to reach the new targets so that they can improve their waste disposal facilities.

Even sucrose has a polymorph

Polymorphism is the ability of a substance to take more than one solid structure and is particularly important in pharmaceuticals. Sucrose has long been held up as one of the few chemicals not to show polymorphism, countering Walter McCrone’s statement that ’every compound has different polymorphic forms.’ Well, maybe McCrone was right after all: in Angewante Chemie, International Edition (DOI: 10.1002/anie.201107283) Ewa Patyk et al, of the Adam Mickiewicz University in Posnan, Poland, report that at 4.80GPa, (+)-sucrose transforms into a new structure, with a change in molecular conformation and new hydrogen bonds formed.

This conformational flexibility, combined with the large number of possible H-bonding configurations is, say the scientists in the their paper, what hampers sucrose crystallisation. Useful for honey bees but not for polymorph hunters. 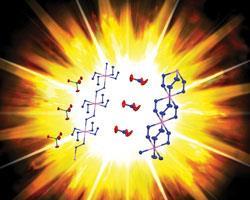 Sensitive materials are routinely used as primary explosives in detonators to set off larger amounts of less sensitive high explosives in mining or military applications. The challenge is to make them stable enough to be handled safely in the field, but also sensitive enough to detonate reliably, packing as much energetic punch as possible.

Louisa Hope-Weeks of Texas Tech University, US, led the research that has made and solved the x-ray crystal structures of three explosive materials based on metal hydrazine polymers, allowing the team to relate the materials’ properties to their structures.

One of the advantages of this class of materials is their tunability, explains Hope-Weeks. ’We can try different metals, different anions and other ligands,’ she says, ’which might allow us to tweak the properties just enough.’

Nano welding with a light touch

US researchers have found a new way to weld together metal nanowires - simply by bathing them in white light. The finding could offer a new way to fabricate transparent nanowire meshes for electronic applications in areas such as touchscreens and organic photovoltaics.

In Nature Materials, (DOI: 10.1038/nmat3238), Erik Garnett and colleagues at Stanford University synthesised silver nanowires 30-80nm in diameter, 3-10 m m long and coated in a molecular sheath of polyvinylpyrrolidine (PVP). The nanowires were deposited on a surface randomly by dropping or spraying. This resulted in many of the wires lying over one another in a criss-cross pattern. When the team shone white light onto the scattered nanowires, heat was generated causing the silver to melt and fuse the wires together.

According to Garnett, the advantages of the technique are that it is much faster, only heats locally and the welding process self-limits, avoiding the problem of overheating the junctions, which can cause them to break apart.

The team is now looking to improve the efficiency of the process.

According to a report from the National Science Foundation, a bloc of 10 Asian countries - China, India, Indonesia, Japan, Malaysia, Singapore, South Korea, Taiwan, Thailand and Vietnam - now counts for 32% of the global share of spending on science, while the US spends 31%. This growth is mainly driven by developments in China, says the biennial report Science and Engineering Indicators 2012 but several other economies have also played a role.

That supplier zone is increasingly including Japan as China is now the second largest R&D performer globally, with 12% of the global spend, overtaking Japan for the first time.

’Governments in many parts of the developing world, viewing science and technology as integral to economic growth and development, have set out to build more knowledge-intensive economies,’ says the report.

’They have taken steps to open their markets to trade and foreign investment, develop their S&T infrastructures, stimulate industrial R&D, expand their higher education systems, and build indigenous R&D capabilities. Over time, global S&T capabilities have grown, nowhere more so than in Asia.’

DNA walker strides towards the light

Nano-welding with a light touch