Did salt lakes snuff out life?

International scientists have suggested that the mass extinction on Earth 250 million years ago was due, at least in part, to millions of tonnes of halogenated gases being released by a giant salt lake the size of France. 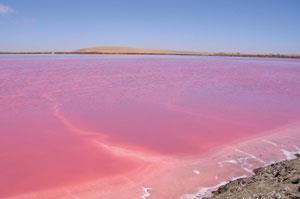 Microbes with a preference for salt turn the lake water pink

To crack the age-old mystery of what caused the demise of many species at this time, the researchers took samples from existing salt lakes in Russia and South Africa and measured a number of volatile halogenated hydrocarbons coming off the samples, produced by the action of bacteria and algae. They found that chloroform, trichloroethene and tetrachloroethene are released. Publishing in Doklady Earth Sciences  (DOI: 10.1134/S1028334X09020263), they suggest that if proportionate quantities of these gases were being released by the large salt lake that is known to have existed in Europe at that time, it could have had catastrophic consequences for the environment.

One possible effect, say the team, could have been the destruction of the ozone layer. Other scientists, however, remain unconvinced by the hypothesis.

Regulations on cosmetics containing nanoparticles have been introduced by the European Parliament, after estimates suggested that about 5 per cent of cosmetic products on the market in 2006 contained the tiny particles.

Previous EU legislation for cosmetics did not mention nanoparticles, but a new set of rules that come into force in 2012 will require that a safety assessment procedure is carried out on all cosmetics that contain them.

It will also be necessary for any nanoparticles present in cosmetics to be clearly included in the list of ingredients on the packaging. Cosmetics that currently contain nanoparticles include sunscreens, lipsticks and anti-aging creams.

However, the measures have received a lukewarm response from the European Consumers’ Association, which has expressed concerns over the three year wait before these regulations come into force and that some products already on the market would not be safety tested.

A new centre to fast-track the discovery and development of novel therapeutics has been launched by the UK’s Medical Research Council (MRC). The centre, which has an operating budget of
?6 million, will forge collaborations with universities and other MRC units to develop drug discovery projects.

State-of-the-art computational and medicinal chemistry will be used to target diseases that do not currently have sufficient therapeutics. Novel antibody therapies will also be focused on - an area of research that is already strong within the MRC.

Justin Bryans, who will direct the new centre, says that it will offer access to expertise for any UK academic who wants to translate their project towards clinical benefits.

US researchers have identified how low levels of polychlorinated biphenyls (PCBs) alter the development of brain cells.

The findings may help explain the links between behavioural defects in children and exposure to these now banned compounds, which were previously used as coolants and lubricants, and in pesticides and flame retardants.

The team from the University of California, Davis, has shown that PCBs ’lock open’ ryanodine receptors - the intracellular calcium channels found in excitable tissues such as neurons. Publishing in  PLoS Biology  (DOI: 10.1371/journal.pbio.1000085) they suggest that this alters brain cell development and contributes to the over-excitation of neurons in the brain.

Two more studies published earlier this year by the same group had shown that low-level exposure to PCBs alters the development of unborn rats’ brain cells, and affect brain-cell circuits in the area of the brain known to be impaired in autism.

Heteroaromatic rings of the future

UK scientists have created a computer program to work out all the aromatic heterocycles that it might be reasonable to synthesise, with a view to expanding the diversity of molecules used in the pharmaceutical and other industries.

William Pitt and colleagues from UCB Celltech and the Cambridge Crystallographic Data Centre have created the Virtual exploratory heterocyclic library (Vehicle), which contains over 3000 never-before-seen heterocycles considered to be ’synthetically viable’.

Less than 10 novel small heteroaromatic ring systems are published each year, the researchers estimate. Publishing in the Journal of Medicinal Chemistry  (DOI: 10.1021/jm801513z), they say that Vehicle should give researchers a broader armoury for replacing the heterocycles that are often at the core of drug molecules to make better medicines and overcome competitors’ patents.

Scientists have created almost frictionless surfaces lubricated by water. The coating they have developed could shed light on how natural joints are lubricated and provide new ways to protect hip and knee joint implants from friction damage.

The group from the Weizmann Institute in Rehovot, Israel, have made polymer ’brushes’ with bristles that have charged side groups. These charges trap layers of water within the brush that act like molecular ball-bearings, so when two surfaces coated with brushes move over each other there is almost no friction between them. The trapped water also allows the brushes to function even under very heavy loads, such as those experienced in our joints. The research is reported in Science  (DOI: 10.1126/science.1169399).

Researchers have discovered a chemical curiosity - alkali metals that eschew water and instead prefer to surround themselves with organic compounds, which assemble around them into clam-like structures. 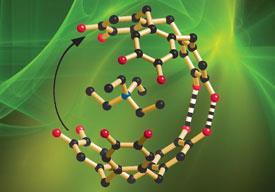 Publishing in Angewandte Chemie International Edition  (DOI: 10.1002/ange.200805789), the team from the University of Melbourne, Australia, were surprised to find that alkali metal cations prefer to surround themselves entirely with aromatic systems, despite being created in an aqueous solution.

Hydrogen bonding holds the two anionic ’shells’ together to form the clam, with the cations forming the ’flesh’ inside. They found that Rb+ and Cs+ were the right size to fit inside the clam. When they used the smaller K+ cation no clam forms, and with larger cations the shells opens up.

The researchers haven’t come up with any direct applications for their discovery yet, and say that it is just a chemical curiosity so far.

A light-activated molecule that can control blood clotting has been created by scientists in the US. The molecule could one day be used to shut off blood supply to localised areas of the human body such as tumours.

The team from the University of Florida are working with azobenzene - a molecule that changes conformation under different light sources. Publishing in Proceedings of the National Academy of Sciences  (DOI: 10.1073/pnas.0812402106), they showed that this molecule can be used to turn on and off the action of the enzyme thrombin - which occurs naturally in the body and promotes blood clotting. Under visible light clotting could occur, but when exposed to ultraviolet the molecule’s structure changes preventing the action of the enzyme and therefore clots from forming.

Another topic concerning new mothers is the US study that found traces of perchlorate in powdered baby formula. The contaminant, which comes from a number of sources including fireworks, has previously been linked to health problems such as reduced thyroid function that can affect babies’ brain development.

Publishing in the Journal of Exposure Science and Environmental Epidemiology  (DOI: 10.1038/jes.2009.18), the team reported that 15 brands of powdered infant formula sold in the US are contaminated with this chemical. Perchlorate has already been found in American drinking water, and the use of this water to make up the milk may push the chemical’s concentration above the recommended safe levels, say the scientists.

The US Food and Drug Adminsistration has said it ’is not recommending that consumers of any age alter their diet or eating habits due to perchlorate’. However the US Environmental Protection Agency has issued a statement saying exposure to this chemical is a serious issue and a top research priority for them.