Night of the nearly dead steroid

Metabolites of a steroid widely used in beef cattle to promote growth have been found to regenerate in the dark after seemingly breaking down during daylight hours. The discovery suggests that the fate and impact assessments of endocrine disrupting steroids entering and persisting in aquatic ecosystems are falling short and require greater attention.

Trenbolone acetate (TBA) is a widely used synthetic growth hormone that's injected into cattle in a number of countries including the US and Australia to increase muscle growth and appetite. Previous research revealed that metabolites of TBA are present in manure and, during both composting and reuse as a fertiliser, there are opportunities for these endocrine disrupting metabolites to leach into the environment and adversely affect fish. 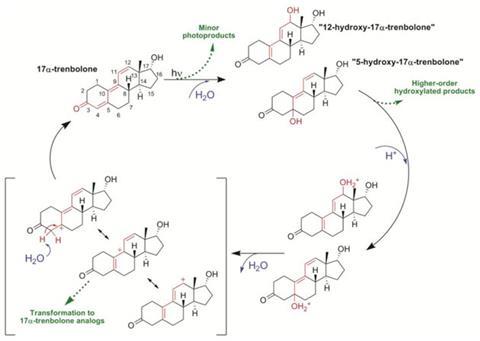 Proposed pathway for the regeneration of trenbolone acetate metabolites

Current models to assess the fate of such compounds suggest they are broken down into harmless products by exposure to sunlight.  But the US researchers have discovered a diurnal process which causes these products to revert back to TBA metabolites at night.

'Up to 70% of the parent TBA metabolite can be regenerated in the absence of light,' says team leader David Cwiertny, at the University of Iowa. 'This light–dark, diurnal reversion process is entirely unprecedented in the literature for steroids under ambient, environmentally relevant conditions.'

It was already known that photolysis of TBA metabolites proceeds via a photohydration reaction, in which light energy is used to integrate water into the trienone structure of the compounds. The hydroxylated photoproducts that are generated are essentially allylic alcohols, a class of compounds that undergo dehydration but typically under much more extreme conditions such as high temperature or pH.

But the team's experiments showed that the photoproducts of TBA metabolites, as well as those of dienogest and dienedione, which are structurally analogous steroids used therapeutically in humans, are highly prone to dehydration and so in the absence of light a substantial amount of the parent compound can be regenerated.

'Most environmental chemists would stop their analyses once substantial loss of the parent is observed,' says Edward Kolodziej, a co-author of the paper at the University of Nevada. 'In fact, we almost missed the phenomenon too, but there were some anomalous trends in our kinetic data – specifically a slowing rate of reaction over time – that suggested something more complicated was occurring.'

'The observed diurnal cycling of the trenbolone metabolites is fascinating,’ says Stuart Khan, who investigates water contamination at the University of New South Wales, Australia. ‘In order to properly assess the fate of these chemicals, and to ensure that our mass–balance assumptions are realistic, it will be necessary to account for these types of reversible transformations.'