No scars with healing nanosheet

Biodegradable nanomaterials could prevent scarring after surgery according to Japanese researchers. They say their polyester-based nanosheets seamlessly seal up surgical incisions in mice and could make having stitches a thing of the past.

’I think maybe, in the future, there will be no suturing - only this taping of the nanosheets to seal the incision site. Operation time will be very short and very easy and there will be no scar after the operation,’ says lead researcher, Shinji Takeoka of Waseda University in Tokyo. ’This [lack of] scarring is a very good advantage for plastic surgery, for example, and for many other operations where people are anxious about scars.’

External scarring is generally seen as undesirable, but internal scarring can also lead to painful and sometimes dangerous adhesions, with areas of tissue that should remain separate become joined by scar tissue. Another important advantage of the new material is that it appears to reduce the risk of these adhesions. In Takeoka’s experiments, several mice whose stomachs were stitched normally showed evidence of adhesion after a week. When stomachs were sealed with nanosheets, however, there were no adhesions, and very little scarring.

The team’s nanosheets are made from PLLA - poly(L-lactic acid). PLLA and other polyesters have been clinically applied in drug delivery and as degradable stitches, but not as ultra-thin sheets, which have very different adhesive and mechanical properties. The researchers formed 23nm thick sheets by spin-coating PLLA on a silicon dioxide substrate and then transferred them to a supporting poly(vinyl alcohol) film. After taping across incision sites, they dissolved the supporting films in saline, leaving just the nanosheets. 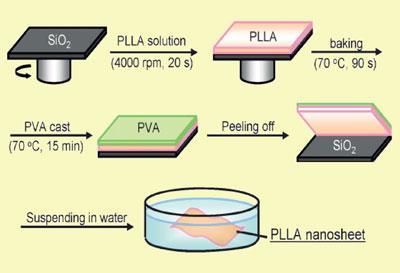 ’The PLLA film prepared by spin-coating was evidently compliant, elastic and adhesive,’ says Weiliam Chen, a biomedical engineer and pharmacist at Stony Brook University in New York. This could, however, have been due to a trace amount of solvent plasticising the material, according to Chen. He also points out that an in depth collagen analysis - collagen bundles being the defining components of scar tissue - is required to confirm the quality of wound healing.

According to Takeoka, it will be at least three years before the nanosheets enter clinical trials, but he thinks they could be used for a wide range of applications, including tissue regeneration, immobilisation of drugs and release of materials for continued patient care post-surgery. ’If you ask 100 medical doctors about applications of this material, each doctor will propose several different unique ideas,’ he says.

But Chen worries that the results in mice will not be reproducible in humans. ’In the mouse model, the tension created held the tissues together and maintained wound closure. This manoeuvre is feasible in a very small organ, but reproducing it in larger animal models will be very challenging.’