By being confined to small islands in a 'non-stick' sea, self-assembling polymers can form into uniform vesicles of a pre-determined size

UK researchers have devised a new method for making polymer vesicles - microscopic, liquid-filled spheres enclosed by a permeable membrane - that keeps tight control over the vesicles’ size. Polymer vesicles, or polymersomes, have a wide range of potential applications, from drug delivery to ’micro-reactors’, but controlling their size has proved a problem.

Now, a team from the University of Sheffield led by Jonathan Howse has shown that it is possible to create a pattern of tiny ’islands’ upon which the polymer building blocks of the vesicles spontaneously assemble and bud off as spheres whose diameter is governed by the size of the island.

Polymers that form polymersomes contain covalently linked hydrophobic and hydrophilic portions. In solution they spontaneously self-assemble into layers that can be coaxed into forming vesicles by a variety of methods such as sonication. However, these methods usually produce vesicles of a wide variety of sizes, and for many applications only one size is useful.

The Sheffield researchers hit upon the idea of forcing the polymers to assemble on a surface with a pre-determined area. Because the surface can accommodate only a given quantity of polymer, the resulting vesicles would be of uniform size.

’We took a silicon surface and coated it with a layer of gold,’ explains Howse. ’We then coated that layer with fluorocarbon, which repels both hydrophobic and hydrophilic molecules - effectively a non-stick surface.’ 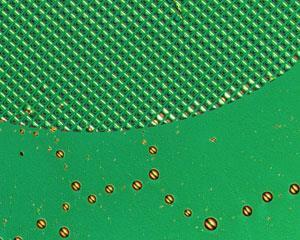 Vesicles form on islands in a ’non-stick sea’

UV light was then used to etch away small square islands in the fluorocarbon layer, and these exposed areas were coated with a hydrophilic compound. This created a grid of ’sticky’ islands in a non-stick sea. The polymer was deposited onto the surface using a technique called spin coating. As it came into contact with the non-stick channels it ’dewetted’, and retreated, confining itself only to the islands.

When water was introduced, the polymer layers on the surface of the islands swelled and spontaneously formed into vesicles. ’The surface area of the vesicle, and therefore its size, is dictated by the surface area of the island,’ says Howse. ’We know that we can define the thickness of the membrane by the molecular weight of the polymer, and now this method gives us a way to define the diameter of the vesicle. I would not necessarily say that we have cracked the problem of creating vesicles of uniform size, but it is a step in that direction.’

3D image of the vesicles forming, showing the swollen exterior bilayer before detachment.

Rachel O’Reilly, who researches polymersomes at the University of Warwick in the UK, is impressed by the work. ’I think this is important,’ she says. ’The fact that they can literally dial in the size and get this new level of control is really novel. It is a nice combination of a top-down approach to size control with a bottom-up approach of molecular self-assembly.’