Researchers in the US have devised a new way to create graphene - sheets of carbon one atom thick that have extraordinary electronic properties - based upon a detailed understanding of the chemical structure of an important precursor of the material, graphite oxide.

There are a variety of ways to produce graphene, such as peeling flakes from graphite, but the challenge is to find a technique that can produce industrial-scale quantities of high-grade material efficiently. One method uses graphite oxide. In solution the oxide disperses into one-atom-thick layers, which can be ’spin-coated’ onto a surface and then chemically reduced to form graphene.

However, so far it has proved difficult to remove all the oxygen from the sample without introducing defects into the crystal lattice - and thereby lose some of the properties.

Now, Wei Gao and colleagues at Rice University in Texas have carried out a thorough analysis of NMR spectroscopic data on graphite oxide to identify the various oxygen structures present within the material, and then worked out an efficient way to eliminate them by reduction. It was already known that oxygen occurs in a number of forms in graphite oxide, including hydroxyl, epoxy and ketone groups. The new work has provided good evidence that previously suspected but unconfirmed structures are also present in the form of five- and six-membered lactol rings. 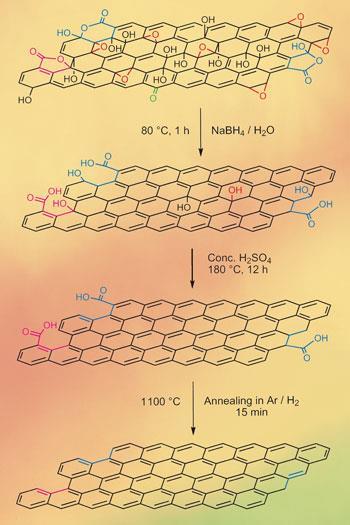 Graphene made by a novel reduction strategy

The team used this information to devise a novel reduction strategy by first deoxygenating the graphite oxide sheets with sodium borohydride, followed by dehydration with concentrated sulphuric acid, and a final step of heating, or annealing. ’Our approach is designed to reduce all the functionalities, including the lactols,’ says Gao. The team haven’t carried out details mechanistic studies, but believe that the lactols are reduced to secondary alcohols and carboxylic acids in the first step, alcohols are then dehydrated into double bonds in the second step, and finally the carboxylic acids are lost as CO2 during the annealing process.

The approach produces far smaller amounts of impurities than other methods based upon reduction of graphite oxide, the researchers say, with concomitant improvement in the resulting material’s properties.

Rod Ruoff, a graphene expert from the University of Texas at Austin in the US, welcomes the new work. ’They have furthered the understanding of the chemical structure of graphene oxide and reduced graphene oxide materials through their detailed spectroscopic analyses,’ Ruoff says. ’It is hoped that other chemists and materials scientists will be inspired by their work and will rise to the challenge of preparing a broad portfolio of chemically modified graphenes, both for developing fundamental understanding of chemistry of graphene, and for a host of possible applications,’ he adds.