Researchers in Canada have stumbled across a new chromatographic separation method that could make an inexpensive and green contribution to the analytical chemist’s toolbox.

Michael Fogwill and Kevin Thurbide at the University of Calgary were experimenting with water at high temperature and pressure (in its so-called subcritical form), saturated with CO2 as a mobile phase in a chromatography system. They used a conventional packed column as the stationary phase and stainless steel tubing either side of the column. When the experiment was finished they removed the column and flushed the remaining sample through the steel tubing. To their surprise they realised that separation was still occurring. ’It was a bit of a eureka moment,’ says Thurbide. ’How were we getting separation?’ 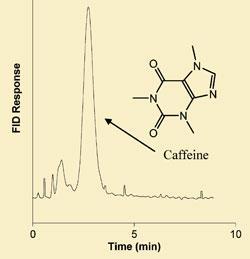 The team analysed the caffeine content of a cup of coffee

Further investigation revealed that water was coating the inner surface of the tubing and remaining stationary. The precise way in which the water is deposited and distributed is not yet clear, but the team calculated that a uniform film would be around 4um deep and that the amount of water held by a given length of tubing was highly reproducible.

’So we are able to coat the stainless steel with water and pump in CO2 as the mobile phase and analytes will partition based upon their ability to dissolve in CO2 versus water,’ says Thurbide.

To demonstrate the utility of the system the team analysed the caffeine content of a cup of coffee bought on the high street and the ethanol content of a biofuel. Because of the high differential solubility of caffeine and ethanol between the phases, sharp peaks were observed with no sample preparation needed.

The researchers point out that the technique is green - it does not use organic solvents or an organic stationary phase - and is inexpensive. Thurbide acknowledges that it is not yet as efficient as it might be, probably because of the relatively thick film of water as stationary phase. The researchers are looking to improve on this.

’It’s great to read papers based on the exploitation of simple unexpected experimental observations and strange anomalies, which end up resulting in a new research direction entirely,’ says Brett Paull, an expert in separation chemistry at Dublin City University in Ireland. ’The work clearly has a way to go, but further developments and applications are sure to follow this first paper,’ he adds.