US chemists have found a new way to create aromatic compounds from straight chains of hydrocarbons by using an iridium-based catalyst. The reaction takes place at much lower temperatures than the conventional way of producing aromatic molecules from hydrocarbon chains and with a much higher degree of control over the end products, some of which are difficult or impossible to obtain by standard routes.

Aromatics are key building block molecules for the chemical industry. They are currently produced mainly by a process of catalytic reforming of petroleum feedstocks, which is carried out at temperatures of around 500?C, and produces a complex mixture of molecules that need to be subsequently separated. 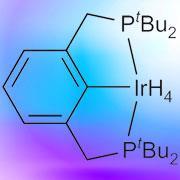 Now a team led by Alan Goldman of Rutgers University and Maurice Brookhart of the University of North Carolina at Chapel Hill has shown that it is possible to produce aromatic molecules from their straight-chain counterparts, n-alkanes, at temperatures several hundred degrees lower than other methods.

The key to the process is a so-called pincer-ligated iridium complex as a homogeneous catalyst. Here, iridium is clamped by three arms contained within a phosphine-based cage. ’This makes it very stable, allowing it to be heated to the temperatures we need, close to 200?C,’ says Brookhart.

When an alkane is introduced to the catalyst, the iridium inserts itself between a C-H bond and prises the hydrogen away, presenting it to a hydrogen acceptor - in this case t-butylethylene. This results in the generation of a double bond within the carbon chain. The process is repeated twice more, creating a triene, which then undergoes cyclisation followed by loss of an additional equivalent of hydrogen to produce the aromatic product.

Different aromatics are produced depending on the number of carbons in the starting alkane. Many of the subsequent products are difficult or impossible to produce by other means says Goldman. ’For example if you start with decane, you end up with linear alkyl aromatics that are normally impossible to obtain with conventional routes, which combine olefins and lighter aromatics. Alternatively, if you tried to make these products from alkanes using current heterogenous routes you would get extensive bond breaking of the carbon chains, whereas we get mostly compounds with the same carbon number as our starting material.’

Anthony Haynes, an expert in homogeneous transition-metal catalysis at the University of Sheffield in the UK, is impressed by the study. ’The transformation of simple alkanes into valuable aromatic compounds is remarkable, and demonstrates the exquisite control of selectivity that is possible with an organometallic catalyst,’ he says. Haynes adds that to make the concept practical ’it will probably be necessary to anchor the iridium catalyst to a solid support.’