The UK government’s recent announcement of a significant expansion for nuclear power generation has rekindled the debate over the safe disposal of radioactive waste.

The public can be forgiven for being sceptical - the UK does not have an especially proud record in its attitude towards the treatment of waste arising from nuclear activities. Francis Livens is professor of radiochemistry at the University of Manchester. ’Research into nuclear waste disposal has been severely neglected in this country for the past 40 years,’ he says. ’Essentially the nuclear waste problem was ignored - people literally locked the door and walked away.’ 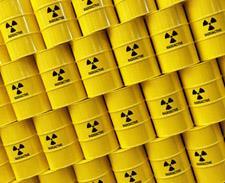 Radioactive waste has been piling up

The result of this failure to face the waste problem has been an accumulation of ’legacy’ waste - material from some 50 years of civil and military nuclear activity. The waste is categorised into three levels, depending on its radioactivity: high, intermediate and low. Currently, high- and intermediate-level waste is being stored in temporary facilities; low-level waste has a dedicated disposal facility. The plan is that by 2040, a deep underground waste repository for the higher activity waste will have been constructed in a location with appropriate geology. Consultation is underway to identify such a site.

In the meantime, research into how to deal with this legacy waste is starting to pick up after many years of stagnation. The eventual aim is to package high and intermediate level waste in a way that will prevent radionuclides from entering the environment.

This will require immobilisation of the material in a suitable matrix, such as a ceramic or cement, depending on the activity of the material, and encapsulating it, probably in stainless steel.

A number of issues need to be investigated, from the effect of highly radioactive material on the materials used for immobilisation and encapsulation, to potential routes by which the radionuclides might be re-mobilised and find their way into the environment.

Taking out the waste

Simon Biggs, of the University of Leeds, is principal investigator of a UK government-funded consortium called Diamond (decommissioning, immobilisation and management of nuclear waste for disposal). ’We are still in a bit of a grey area because we do not have a UK-based repository for long-term disposal,’ he says. ’This means we cannot begin the final processing for the waste we are sitting on because we do not know the geology of the repository - whether it will be dry rock or wet rock for example. The choice of material we use to immobilise the waste is at least partially dependent on the environment it will live in for the next hundred, thousand or ten thousand years.’ 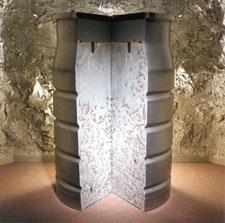 In the meantime, however, Biggs says we can make ’pretty intelligent guesses’ that allow researchers like him to test different types of cement, grout materials, glasses or ceramics. ’Most of the waste will be encapsulated in stainless steel containers, so we can test different types of stainless steel under different conditions to develop a fundamental understanding that will ultimately help to speed things up,’ he explains.

At the University of Cambridge, Ian Farnan is interested in understanding precisely how radiation damages materials that might be used to immobilise or contain nuclear waste. ’We require materials that are extremely durable, so that even if the material comes into contact with water it will not release radioactive elements very quickly,’ Farnan says.

’We know that there are minerals such as zircons which in nature contain uranium and thorium and retain them for thousands of years. These are the sorts of materials that we would want to use to guarantee that the radionuclides will stay where they are put.’ The big issue, Farnan explains, is that in nature these minerals contain only a single per cent or so of uranium or thorium, whereas nuclear operators will want something that is able to contain nearer ten times that level of heavy alpha emitters. The question is whether these minerals can hold on to such large amounts of radioactive material.

Farnan’s team is using magnetic resonance to probe damage caused by decaying radionuclides in mineral matrices. One class of materials that look especially interesting are minerals based on phosphate, such as apatite. ’In nature these have been shown to be able to hold high concentrations of radioactive alpha-emitters - between 10 and 14 per cent,’ says Farnan.

The team made samples of apatite containing plutonium isotopes to measure the pattern and nature of damage caused. ’When a heavy element emits an alpha particle, the nucleus of the atom recoils with extremely high energy and this recoil causes significant damage to the surrounding atomic environment, displacing thousands of nearby atoms,’ says Farnan. ’This destroys the crystalline lattice causing the structure to become amorphous. But some materials are better at recrystallising than others, and phosphate-based minerals appear to be good at this.’ (see video)

Neil Hyatt, at the University of Sheffield, is investigating radiation damage of ceramics. His lab is using high-energy ion beams to simulate alpha recoil from actinide decay. 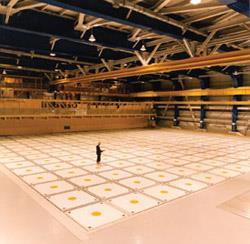 It is important, says Hyatt, to develop realistic simulations of radioactive decay. His team has been using extended x-ray absorption fine structure spectroscopy (EXAFS) at a grazing angle to gain information about the structure of the ion-beam-amorphised surface layer without probing the undamaged interior.

’We are getting good evidence that fast ion bombardment leads to a radiation-amorphised material which is indistinguishable from that produced by alpha decay in natural minerals,’ says Hyatt. ’Lots of people are doing very interesting and sophisticated molecular dynamics simulations of radiation damage in materials like zirconolite, but there is a need to map these simulations onto experimental data to show that modelled damage cascades are representative of what really happens in materials.   Combining grazing angle EXAFS and ion beam implantation is allowing us to take a systematic experimental approach to improving our fundamental understanding of radiation damage and underpin materials simulations.’

The fate of radionuclides once they are within a long-term disposal facility is also a key issue. Nick Evans at Loughborough University is investigating how uranium and technetium interact with organic residues.

’There will be organic molecules within the repository,’ explains Evans. ’These could arise from decontamination agents such as EDTA [ethylenediaminetetraacetate] or picolinic acid; intermediate level waste contains a large amount of cellulose in the form of tissues or lab coats or bench tops. Cellulose degrades over time to form organic species that can complex with the radioactive species.’

One advantage of using cement and stainless steel canisters to immobilise and contain waste is to keep the actinides in a low oxidation state and high pH environment, which stops them from moving. However, when radionuclides complex with organic molecules they can re-dissolve and there is a danger it can be washed away and into the wider environment. ’So we need to be able to control the pH and the [reduction potential], but also understand the behaviour of all the other molecules that are present which could affect the solubility, and hence mobility, of the radionuclides,’ says Evans. ’If we understand how mobilisation of radionuclides might arise, then we can think of ways to mitigate the rate and quantity that might be released, to the extent that it becomes harmless to the environment.’

So while the UK research base into nuclear waste is slowly building, there is a lot of ground to make up, according to Livens: ’Things have improved a little over the past ten years but we are still a long way from where we should be, particularly if you look at countries such as Switzerland, Germany, France and the US. In recent years we have recognised where we do not have relevant expertise, and that is a first step towards dealing with these pressing problems. We are starting at a very low base along what will be a long and complex journey.’

Metal sulfide removes radioactive strontium from a mix of ions