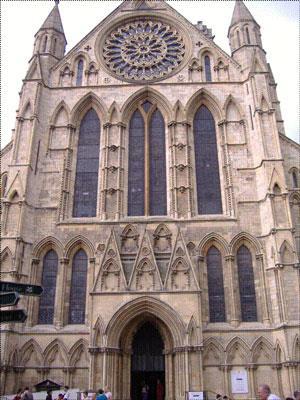 R A Walker and A Holton

Could olive oil be the answer to protecting ancient buildings from atmospheric pollutants? Researchers have developed a breathable, water-repellent coating based on oleic acid – the main fatty acid component of olive oil – that has shown promising results in shielding samples of stone from one of Europe’s most famous cathedrals from acid attack.

The research team, led by Karen Wilson of Cardiff University in the UK, worked with conservators at York Minster, the second largest gothic cathedral in northern Europe. The building was constructed between 1220 and 1470 using mainly magnesian limestone, CaxMgy(CO3)2. However, this material, together with limestone, is prone to attack by pollutants such as oxides of sulfur in rain. While levels of these pollutants have fallen in recent years, its legacy remains locked in the stonework in the form of sulfates. These can rise to the surface, where they can crystallise in small cracks and crevices, weakening the stone, which is then broken down and washed away by rainwater.

Protective coatings have been used on ancient buildings in the past, but these have been impermeable, sealing the masonry microstructures and not allowing the stonework to ‘breathe’. This can encourage the growth of mould and the efflorescence of salts within the stone.

Wilson’s team, funded by the UK Science and Heritage Programme, has formulated a new coating based on oleic acid and the highly hydrophobic 1H,1H, 2H,2H-perfluoro-decyltrimethoxysilane, C10H4F17Si(OMe)3. The mixture of the two compounds creates a superhydrophobic coating that repels water with high efficiency while remaining permeable to air. The researchers tested a small sample of stone from the Minster with the new coating, exposing the stone to sulfuric acid. X-ray absorption analysis at the Diamond Light Source showed that the calcium minerals remained largely protected from the acid, with little formation of gypsum – calcium sulfate dihydrate. ‘The technique allows us to home in on the calcium atoms and look at the structure surrounding them,’ says Diamond’s Andy Dent. 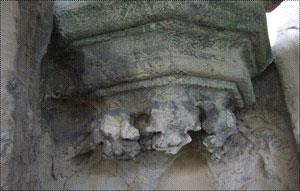 R A Walker and A Holton

Legacy sulfates can crystallise in cracks and crevices damaging stonework

Wilson says: ‘The next stage would be to try to get some samples which have been treated and place them in different positions in the building so they are exposed directly to the atmosphere.’

‘Although levels of air pollution are thought to have been decreasing in recent times, its effect on buildings such as York Minster can continue in the form of serious salt weathering and decay, often referred to as the “memory effect”,’ explains Alex Holton, a heritage expert who has worked extensively on York Minster and who was consulted by Wilson during the project. ‘This often means that the replacement of historic stonework with new [stone] to arrest deterioration is the only viable option … The findings of Cardiff University, therefore, adds a further alternative option to the conservation palette, which may mean that more stonework can be retained during future programmes of repair.’