Researchers from Germany and China have developed a method to obtain a 3D image of a nanocrystal, with atomic resolution, using just a single 1D snapshot. 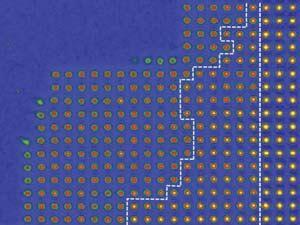 From a single 1D image of the sample's surface...

At the nanoscale, atomic arrangements have a huge influence on a material’s properties, such as its catalytic activity. In this context, a nanoparticle’s surface is particularly important as it is much larger compared to the particle’s total volume than for macroscale objects. However, obtaining detailed information about a nanocrystal’s surface topology, atom arrangement and impurities is difficult. Classic transmission electron microscopy (TEM) is useful for determining crystal lattices, but is not very sensitive to surface structure. Crystal tomography, which produces a 3D image from a series of TEM images taken along different viewing directions, is the most reliable method for surface imaging. But to obtain atomic resolution, usually dozens to hundreds of images must be taken. This means exposing the sample to large doses of high-energy electrons, often damaging its surface.

Andreas Thust from the Research Centre Jülich, Germany, Chunlin Jia from Xi’an Jiaotong University, China, and colleagues have now used a highly sensitive electron microscope and sophisticated data analysis to reconstruct the surface of a MgO crystal from a single TEM image. The microscope’s sensitivity allows the researchers to resolve minute intensity differences in the scattering signals from both the top and bottom surfaces of the crystal, giving them all the information they need to to reconstruct a 3D image of the sample by comparing it with computer-modelled images. ‘The major problem was signal-to-noise,’ says Thust, which is why this type of imaging is currently only possible with state-of-the-art equipment. At this stage the technique is also time-consuming because the structure reconstruction is performed manually, taking several weeks. However, ‘if it was automated, it could be done in a few hours’, Thust suggests. 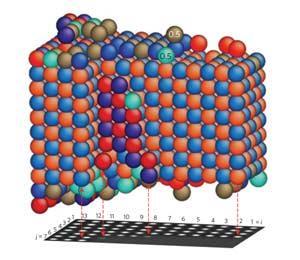 ‘[Until now], the reconstruction of the 3D shape of nanostructures required at least two images,’ explains Staf Van Tendeloo, from the University of Antwerp, Belgium, who also works on TEM imaging. However, van Tendeloo notes that Jia and Thust assumed a crystal free of vacancies. ‘The method is indeed very useful, but for many nanomaterials, the properties are controlled by the presence of vacancies,’ he says. ‘The method needs to be extended [for these cases].’

With an exposure time of only one second, the technique could be used to study radiation-sensitive samples, Thust predicts. ‘We are interested in time-resolved acquisitions because of discussions in electron microscopy about sample damage. We want to observe how the surface of the sample changes [during the process].’ The short acquisition time means the technique could also be used to study surface changes during chemical reactions.