Researchers in Germany have developed a novel way to ’round up’ biological molecules that are freely suspended in solution and trap them in a confined space using nothing more than light.

By creating carefully patterned thermal gradients within the solution, molecular ’conveyor belts’ can be created, carrying the molecules to a pre-determined destination. The technique offers a benign way to manipulate biological molecules without subjecting them to potentially damaging treatments such as immobilising them on surfaces.

Franz Weinert and Dieter Braun at Ludwig Maximilians University, Munich, created their optical conveyor belt by exploiting the phenomenon of thermophoresis, where molecules are moved within a liquid by a temperature gradient, coupled with a thermally-driven method to make water flow in a given direction. 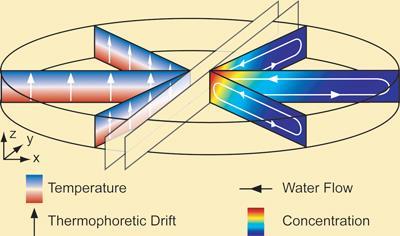 The researchers placed a thin film of water containing single stranded DNA molecules between a glass surface and a metal-coated base. By heating a spot on the base with an infrared laser a thermal gradient is created in the fluid layer, with cooler fluid at the top. This pushes the DNA molecules towards the top of the film. The laser is then scanned in a radial pattern from the centre; as the laser spot moves it heats up the fluid locally causing changes in viscosity which result in contraction and expansion of the fluid either side of the moving spot, which causes the fluid to flow outwards, away from the centre. The layer of fluid above this moving ’belt’ moves in the opposite direction to conserve mass. In this way, the molecules, which have been drawn to the upper layer of the fluid by the initial heating, are pulled towards the central spot, where they accumulate.

Weinert and Braun showed that high concentrations of DNA can be accumulated within a few seconds when carried on the conveyor. ’The mechanism does not require microfluidics, electrodes, or surface modifications,’ the researchers say. ’As a result, the trap can be dynamically relocated. The optical conveyor can be used to enhance diffusion-limited surface reactions, redirect cellular signalling, observe individual biomolecules over a prolonged time, or approach single-molecule chemistry in bulk water.’

The conveyor belt collecting polystyrene beads with a diameter of 40 nm (top). After the trap has switched off, the particles diffuse freely. The same process works for single-stranded DNA (bottom)

David McGloin, who leads the applied optical manipulation group at the University of Dundee in the UK says that capturing freely diffusing molecules and other nanoscopic particles is a difficult problem and that the new technique ’is powerful in that it is relatively simple, needing only a laser and the sample chamber.’ McGloin adds, ’It is at present an accumulation technique and will need some modification to handle only single molecules by themselves. However in cases where diffusion limits or hinders processes under study it is an elegant way to concentrate a large number of molecules at a specified point in a simple manner.’