Scientists believe they may have cracked an important conundrum in atmospheric chemistry: how a volatile molecule released by plants helps to form aerosols that can have a profound effect on weather and climate systems.

Isoprene, C5H8, is emitted by deciduous plants and is the largest source of hydrocarbons other than methane to enter the atmosphere - estimated at more than 500 million tonnes each year. It has been known for many years that isoprene participates in the formation of aerosols - tiny liquid droplets suspended in the atmosphere. These ’secondary organic aerosols’ play an important part in the formation of clouds and the cycling of water in the atmosphere. However, their composition and the chemistry of their formation has remained elusive, leaving a large gap in knowledge for those trying to develop comprehensive atmospheric models. Isoprene itself is too volatile to attach to particles in the atmosphere and create aerosols.

Now, a team led by Fabien Paulot of the Institute of Technology in Pasadena, California, has demonstrated the chemical process by which isoprene can contribute to the formation of secondary organic aerosols. The work could have important practical value for air quality modelling.

In the laboratory the researchers simulated conditions found in the atmosphere above forests where it is known that hydroxyl radicals oxidise isoprene in the presence of sunlight. Using chemical ionisation mass spectrometry and tandem mass spectrometry, the team identified organic hydroperoxides and epoxides. The presence of these molecules enabled the researchers to formulate a reaction pathway by which the isoprene can be attacked by hydroxyl radicals, ultimately forming epoxides. Crucially, the pathway results in the recycling of the hydroxyl radical. This is important because previous ideas about the oxidation of isoprene would result in a net consumption of hydroxyl radicals - something that is not observed in the field. 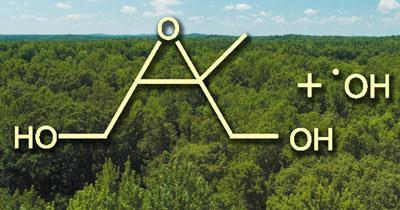 An example of one of the epoxides formed in the atmosphere

Furthermore, the researchers showed that when the epoxides come into contact with existing aerosol particles, they are taken up by the aerosol and consequently contribute to the aerosol mass.

Markus Kalberer, who researches organic aerosols at the University of Cambridge in the UK is impressed with the research, highlighting the interaction observed between the epoxides and the aerosol particles as particularly interesting: ’In this whole business of secondary organic aerosol particles this has been a missing link and they have done a really nice job on the chemical identification - often you see papers where there is a lot of guessing. Epoxide has been hypothesised for more than 10 years and this seems to confirm its role, and it does appear to be the dominant route of this oxidation pathway, which, importantly, recycles the OH.’