US researchers show thermoelectricity in a carbon-based molecule

US researchers have successfully demonstrated the thermoelectric effect in an organic molecule. Until now, thermoelectricity - the generation of electricity directly from heat - has largely been confined to systems consisting of metals or inorganic semiconductors. The findings open up the possibility of potential new energy sources, and also present a novel way for probing the electronic structure of molecular junctions, something that is crucial for the development of the field of molecular electronics.

’The effect may seem quite small now, but this is a significant proof of concept and the first step in organic molecular thermoelectricity,’ said Pramod Reddy, one of the research team. 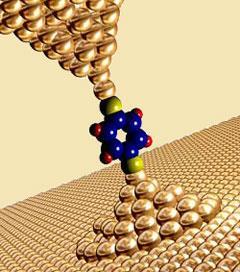 The phenomenon is known as the Seebeck effect, and was first observed almost 200 years ago. It is commonly seen where the junctions of two different metals are kept at different temperatures to generate a voltage, but it has proved difficult to exploit the process to produce efficient power generators. Most systems require expensive metals such as bismuth and tellerium, making them costly to manufacture.

The California researchers are hopeful that their work marks a breakthrough in thermoelectricity and that more cost-effective thermoelectric converters might be possible with organic-based systems.

’The goal is to make things out of materials that are more abundant and more easily processed,’ said Rachel Segalman, another member of the Berkeley team. ’Organics are cheap and can be easily processed.’

This view was echoed by Majumdar: ’The use of inexpensive organic molecules and metal nanoparticles offers the promise of low-cost, plastic-like power generators and refrigerators,’ he said.

David Cahill of   the Universityof Illinois, Urbana Champaigne, is impressed by the study. ’The Berkeley group has accomplished a terrific advancement in the
science of thermoelectricity at the level of individual molecules,’ he told Chemistry World. ’Their methods open up a wide array of new molecular structures that can be probed and optimised for their ability to convert heat into electrical power.’

However, Cahill pointed out that there is still a long way to go. ’The molecules that the Berkeley group studied are a long way from an efficient energy material. The Seebeck coefficient - that is, the size of the voltage produced by a given temperature difference - is at least an order of magnitude too small. But it points the way forward as a new direction for the field.’

The research team now proposes to test different organic molecules and metals and fine-tune the assembly of their system.