The natural cement produced by oysters to build extensive reef systems contains significantly more inorganic material than the glues of other marine species, and could spur development of new synthetic adhesives for biomedical devices or antifouling coatings for ships, say researchers in the US.

Jonathan Wilker and his team at Purdue University and colleagues at the University of South Carolina have been investigating how oysters bind to reefs and each other, in a bid to develop synthetic composite materials with properties that imitate the oyster glue.

The team analysed the chemical composition of oysters’ adhesive using infrared spectroscopy, electron paramagnetic resonance spectroscopy and thermogravimetric analysis. They found higher protein content in the adhesive material than in oyster shell (10 per cent as opposed to 2 per cent), and evidence of protein cross-linking, iron species and radical species. 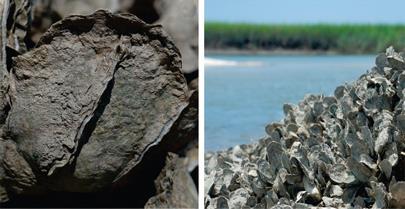 Oysters cement themselves together (left) and can form large reefs (right)

However, the rest of glue, around 90 per cent, was formed mainly of inorganic species such as calcium carbonate. This feature separates oysters from other marine species such as mussels and barnacles, whose glues are predominantly protein based with only a small portion of inorganic material. ’It looks like oysters have more of a hard, inorganic cement compared to mussels and barnacles that produce more of a soft organic glue,’ says Wilker.

’This study reveals new details of a previously poorly-characterised marine adhesive, and a rare example where a significant inorganic mineral component is present,’ says Phillip Messersmith, an expert in biomedical engineering at Northwestern University in Illinois, US. ’It will be interesting to see if follow-up studies provide insight into the mechanism of formation, crystallography and mechanical role of the inorganic component,’ he adds.

Wilker hopes that the different properties of the oyster adhesive compared to mussel or barnacle glue could lead to a new class of synthetic materials. ’One of the more appealing ideas would be if you could adapt this kind of technology into a surgical adhesive, a bone cement or dental cement,’ he tells Chemistry World.

By understanding how the oysters stick to surfaces the team could also develop surfaces that prevent them sticking in the first place, which could be useful in antifouling coatings on ship hulls, Wilker says. At present, copper based paints are used, but they can be toxic to marine organisms as the copper is released into the water.