Company profile: Victrex is taking high-performance polymers to the limit

When it comes to high performance polymers, polyetheretherketone – or Peek – is at the top of the pile. Until a few years ago, UK firm Victrex had a virtual monopoly on the material, thanks to its patented process for making it. But some ambitious plans for growth, coupled with increasing competition once those patents expired, have driven the company to step up its innovation.

Richard Ainsworth, head of core technology in Victrex’s polymer solutions division, explains that the company began by simply supplying basic Peek resins that customers would then process themselves. ‘We’ve grown from there, and now also supply compound materials where the Peek is combined with other materials to enhance certain properties. Then we have products like films, pipes and coatings, and a medical business as well,’ he says.

But where the company is really seeking to excel is in partnering with customers to solve problems that take best advantage of Peek’s properties. It performs well at high temperatures and pressures, is resistant to chemical attack and hydrolysis and is easy to process and recycle, Ainsworth explains. ‘It’s very strong for its weight,’ he adds, ‘so it lends itself to replacing metal parts in planes or cars to lower the weight.’ Removing 45kg of weight in an aeroplane saves over £6000 in fuel costs per year, so even though Peek is relatively expensive as polymers go, in the right applications it still represents good value.

This kind of value proposition is what Victrex is now targeting. ‘We’re looking to the market to see what benefits and properties they want out of a polymer, not just selling plastic,’ says Ainsworth. 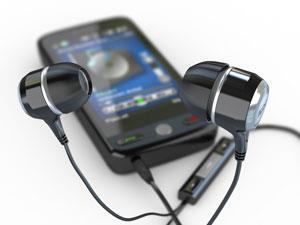 Peek films are perfect for small-space acoustics, like smartphone and headphone speakers

Examples come in all shapes and sizes. As smartphones get smaller and hotter inside, that puts more stress on their components. Ainsworth explains that Victrex’s Peek films are perfectly suited to making the film backing for phones’ tiny speakers. ‘As speakers flex, you can get fatigue – especially in small speakers – which leads to a crackly noise. An Aptiv Peek film is three times more reliable than the standard speaker diaphragm, and can operate at higher temperatures. Over 800 million smartphones contain Aptiv films.’

At the other end of the scale, Victrex is developing sub-sea risers for oil rigs in partnership with Magma Global. These giant pipes transport oil from deep sea wells to the surface platforms. ‘Currently these would be made of metal,’ explains Ainsworth, ‘which is very heavy and has corrosion problems – both from the salty seawater and corrosive components of the oil.’ As well as improving corrosion resistance, Peek pipes could be easier to seal and maintain, he says, making them more reliable and safer than metal equivalents.

But such hot, high pressure, chemically aggressive environments push Peek to the limits of its performance. Therefore the company is developing ever better ways to tune and refine the polymer’s performance. On a chemical level, changing the polymer architecture – the molecular weight distribution or copolymerisation – has profound effects on the properties.

‘There’s a balance between relative stiffness and toughness,’ says Ainsworth. Victrex also supplies PEEK for downhole seal rings in the oil industry. These need to be very stiff, but it doesn’t matter so much if they are a bit less tough as they operate at high temperatures, where brittle fracture is less of a problem. On the other hand, the company can also supply tougher grades of Peek, for example for replacing metal gears in the automotive industry. Sacrificing a little stiffness gives the polymer better wear characteristics by making it even less brittle than usual.

When Victrex was born from ICI in a management buy-out almost exactly 20 years ago, it had 40–50 employees and a single manufacturing plant. Its chief executive, David Hummel, was one of the original team that led the buy-out, and has led the company ever since. It now employs over 650 people and is investing £90 million in a third powder manufacturing plant that will come online in spring 2015.

Ainsworth is proud to point out that the expansion is being funded through operating cashflow, not debt. ‘Victrex likes to invest ahead of demand,’ he says. ‘Our current plants are running at about 65% capacity, and the new one will increase our overall capacity by 70%. But that’s what we need if we want to get into these bigger markets – our customers want to see security of supply over long periods, and we want them to see us as product and technology leaders.’