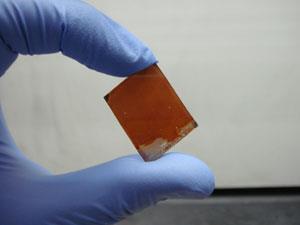 A new candidate has emerged for a low-cost photovoltaic cell, based on an inert alumina scaffold coated with a highly crystalline organometal halide. Early versions of the solar cell show that it can convert almost 11% of light energy into electrical energy, with the prospect of much higher efficiencies.

The search for new solar cell technologies is intense, with efforts aimed at finding alternatives to systems based on semiconductors such as silicon or gallium arsenide. These work at an efficiency of around 25%, but are expensive and tricky to process. Dye-sensitised solar cells (DSSC), in which an electron-rich dye absorbs light and ejects electrons, cost less and are easier to process, but efficiencies are struggling to exceed around 12%. Now, a team led by Henry Snaith at the University of Oxford, UK, believes it may have found a credible alternative.

In DSSC systems, the electrons from the dye absorber are passed to a conducting electrode made from titanium dioxide. It is the TiO2, says Snaith, that is a key weak link in the quest for greater efficiency. ‘The titanium–oxygen bonds at the surface cannot maintain the same order as in the bulk crystal, giving rise to a range of species such as OH groups and titanium cations,’ says Snaith. This results in an energetically ‘bumpy’ landscape at the surface, where electrons can tumble into pits and troughs, becoming trapped and unable to do useful work.

Snaith’s team has been looking at a new type of absorber – highly crystalline organometal halide semiconductors belonging to the perovskite class of structures. The team showed that their material, methylammonium lead iodide chloride, was an efficient absorber of light energy. Intriguingly, the material is also a good charge conductor – making the presence TiO2 redundant. Instead, the perovskite can be crystallised as a thin film over the surface of a porous Al2 O3 scaffold, which is an electrical insulator. Free electrons generated in the perovskite are transported directly to an electrode.

The system generates a high voltage and, importantly, has low energy losses. ‘Because it is energy loss that sets the fundamental efficiency of photovoltaic devices, our system has high potential for a significantly increased efficiency,’ says Snaith, adding that the components are less expensive than for DSSC.

Photovoltaics expert Lane Martin from the University of Illinois in the US describes the work as ‘exciting’. Martin says: ‘The material of interest shows strong absorption of sunlight across the most important range of wavelengths, efficient transport of charge and the ability to withstand prolonged exposure to light. Overall the work in these different materials systems is important and shows that there are a number of materials beyond the traditional systems that have potential for alternative energy applications.’