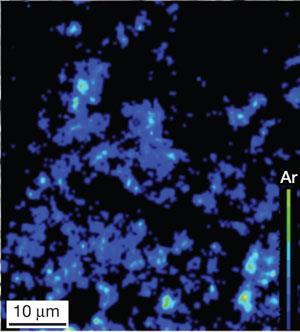 An x-ray map shows argon dissolved in perovskite, with concentration ranging from near 0 (blue) to 0.8% (green)

Minerals emerging from the molten Earth 4.5 billion years ago may be able to answer a question that has puzzled scientists for 35 years. Compared with the balance of noble gases found in meteorites, the Earth is xenon-poor. If meteorites and the Earth were formed from similar materials at the same time, where did the xenon go? Some scientists think that the answer could be found in xenon trapped in the Earth’s iron core, or in ice, water or rocks near the surface. But Svyatoslav Shcheka and Hans Keppler from the University of Bayreuth, Germany, say that the solution to this riddles lies with perovskite (MgSiO3) minerals thought to be the main constituent of Earth’s lower mantle today. They have found that this mineral can absorb the noble gases krypton and argon, but not xenon.

‘In the first stages of Earth’s planetary evolution, after the accretion process, it was completely molten,’ Shcheka tells Chemistry World. ‘Perovskite crystallises from this magma ocean contemporarily with the escape of the original primordial atmosphere into space.’ The perovskite could soak up krypton and argon dissolved in the magma ocean and release it into the atmosphere later, they argue. But most of the original xenon was lost forever. ‘We will never find that missing xenon on the Earth,’ Shcheka says.

While previous suggested solutions to the xenon abundance conundrum all have flaws, received wisdom meant silicate minerals like perovskite was overlooked, Shcheka says. ‘I think that people believed that the lower mantle, consisting of dense silicates, wouldn’t have any room for noble gases,’ he explains. However, Keppler spotted discrepancies in measurements other scientists had previously made on perovskites and suggested Shcheka consider them. But testing how soluble noble gases were in silicate minerals presented another barrier. That’s because recreating lower mantle temperatures and pressures meant heating the materials to 1800°C at 25GPa.

‘It’s not easy to conduct these experiments,’ Shcheka says. ‘The main challenge is to keep noble gases in the capsule when you get to such high temperatures and pressures. Under such extreme conditions it’s very easy for gases to escape. Even in our case, we were successful only about 10% of the time. We had a lot of explosions – when our assembly doesn’t hold pressure, there’s a lot of noise and breakage.’

Richard Greenwood from the UK’s Open University, who previously found evidence for large magma oceans in the early solar system, applauds the ‘very difficult experimental work’. ‘Their results clearly show that argon is much more soluble in perovskite than xenon – that in itself is an important observation,’ he says. ‘It is likely to open a debate and stimulate others to undertake similar experiments.’

Greenwood’s Open University colleague Sasha Verchovsky questions the Bayreuth scientists’ use of high noble gas pressures in their experiments when, in the molten Earth, the gases were dissolved in magma. ‘I think that such high concentrations of argon can be impregnated into perovskite when there is a high pressure free phase of argon around it during crystallisation,’ Verchovsky says. ‘Otherwise it will not enter the structure.  I’m not sure that I’m right, but the authors are not discussing this at all.’ Greenwood agrees that uncertainties remain. ‘It is hard to see how the experimental conditions can be directly related to conditions on the early Earth,’ he says. ‘But I think the idea is interesting.’

Shcheka concedes that it’s impossible to be certain that his explanation is right, but still backs the scenario. ‘It’s a good approximation,’ he says. ‘When you look at the solubilities and the isotope fractionation of xenon, it looks like the processes we described are responsible.’