Scientists in China have used a common protein to create tiny optical lenses, a few tens of micrometres in diameter, whose focus can be adjusted simply by changing the pH of the surrounding medium. The researchers suggest that such lenses could be as optical components in lab-on-a-chip systems or biologically inspired artificial compound eyes.

The research team, led by Hong-Bo Sun and Wen-Fei Dong of Jilin University, fired pulses of laser light at a solution of the soluble protein bovine serum albumin containing the photosensitiser methylene blue. The interaction of the laser energy with the dye creates free radicals which cause crosslinking reactions between the protein molecules, resulting in a hydrogel. Computer software can be used to programme the pattern of laser pulses to ’cut out’ tiny lenses from the protein solution.

The breakthrough achieved by the Chinese team was to configure the system to produce a smooth surface on the lens. Previous efforts had resulted in an excessively rough surface. By optimising the duration of the laser pulse, its intensity and the concentration of the protein, the team obtained lenses with an exceptionally smooth surface capable of focusing light. 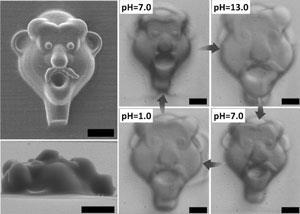 Furthermore, the optical properties of the protein lens changes depending on the surrounding pH, as Sun explains. ’Because the photo-crosslinked protein microstructures contain weak acid and base pendant groups, these groups will be protonated or deprotonated depending on pH variations, so the electrostatic interaction between the groups can be manipulated. This results in swelling or shrinking of the protein microstructures.’ This causes both a change of volume of the structure and a change in its refractive index. By altering the pH of the surrounding medium, the focus of the lens can therefore be adjusted.

Sun says that the approach would allow proteins to be used as building materials for functional devices, especially photonic systems. ’Traditional materials may be replaced by proteins to a certain extent, which is greatly helpful for the promotion of environmentally friendly industries. There are also huge opportunities to introduce more innovative functions into photonic or electronic micro- and nano-components.’

Ryan Hill, of Duke University in the US, has worked on protein microstructures and says: ’Sun and colleagues have presented a well-characterised piece of work that extends micro-lens fabrication capabilities into the realm of "bio-inspired". With readily available proteins as their building blocks, they are able to create functional micro-optics by using multiphoton lithography to photo-crosslink the proteins into 3D shapes that can focus light and create images.’