The South African authorities are probing an alleged ?1.2 billion fraud that used purchase orders claiming to be from leading drug firms to entice investors. The investigations focus on Barry Tannenbaum and the international investment schemes built around active pharmaceutical ingredient (API) supplier Frankel Chemicals. According to the Financial Mail, the South African magazine that broke the story, investors may have lost as much as Rand15 billion (?1.2 billion).

In June, SSG Forensic Consultants claimed it had uncovered ’South Africa’s largest Ponzi scheme’ -  a fraudulent investment scam where early investors are paid dividends from investments made by later investors, rather than from any actual profit earned by the company. SSG has published a range of documents that it says it received from Tannenbaum that purport to show Frankel Chemicals as a legitimate trading company,  with one document appearing to be an order for over 80 tonnes of antiretroviral (ARV) drug compounds reputedly received from Aspen Pharmacare.

At over Rand40 million, this order was the single largest in the dossier, and elsewhere Tannenbaum’s documentation suggested that Aspen owed Frankel Chemicals Rand700 million. When published by SSG, this produced a prompt and sharply worded response from Tannenbaum refuting the claims.

A year previously, the South African government selected suppliers to provide antiretroviral (ARV) drugs to treat 1.2 million HIV-positive patients. Aspen, which says it is the largest pharmaceutical company in the southern hemisphere, was one of the selected suppliers.  At the time, investment bankers JP Morgan valued Aspen’s 56 per cent share of the tender at Rand1 billion per year. Tannenbaum bundled this investment analysis together with the supposed order document and other information on the South African HIV medicine market in a dossier to encourage investment in the company.

’Aspen is aware of the existence of documents representing to be purchase orders and other correspondence between Aspen and Frankel which were neither prepared nor authorized by Aspen,’ the company said in a statement. ’These documents have been fraudulently prepared using forged purchase order templates and forged signatures. There are no monies owing to Frankel for the alleged purchases of ARV materials.’

Despite such strong statements, Tannenbaum’s attorney Darryl Ackerman was quick to point out that so far no prosecutions are pending following investigations into the fraud accusations. ’A lot has been said, by any number of people, including all types of media,’ Ackerman told Chemistry World. ’Everybody has had something to say. He [Tannenbaum] has been tried, pilloried and convicted, yet there’s not a single charge against him, in this country, or any other.’

However, responses from the industry support accusations that all dividends were paid from funds received from investors. ’In the past, Frankel Chemicals has acted both as a commission agent and, for a very limited number of products, as a distributor for Mallinckrodt’s Active Pharmaceutical Products business,’ explained Joanna Schooler, a director at Mallinckrodt’s parent company Covidien. ’But over the years, the amount of sales generated by its efforts have been extremely minimal.’

Tannenbaum’s grandfather was one of the founders of another of South Africa’s leading pharmaceutical companies, Adcock Ingram, but the family sold out its holding in 1978. Frankel Chemicals was subsequently founded in 1983 as an intermediary in the supply chain of drug compounds.

Manufacturers ranging from Pfizer to lesser-known companies such as Hangzhou Lanpharma sell drug compounds to Frankel, before it sells them on to be processed into final medicinal form. Frankel claims that this saves the medicine makers time getting the compounds through customs, and means that the API producers get paid quicker.

With a large number of drug patents set to expire over the next five years, players in the generic industry are attracting investment from major pharmaceutical companies and elsewhere. Having recently become sole director of Frankel, Tannenbaum advertised his business as able to provide nearly 10 per cent returns on invested capital per year - as long as the firm had the cash to pay for the APIs upfront. ’If Frankel does not raise sufficient further investment it will not be able to grow in line with its customers,’ its brochure warns.

As well as locally headquartered Adcock Ingram and Aspen, Novartis’ generic drug manufacturing subsidiary Sandoz and Merck KGaA were among those that bought APIs through Frankel Chemicals. Merck, which produces generic drugs in South Africa at its Wadeville plant, says that it did buy APIs from Frankel once, but invoices for any other ’orders’ produced by Tannenbaum had been falsified. 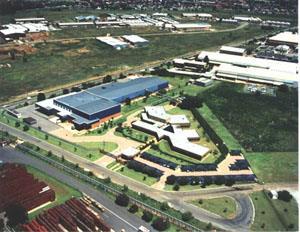 Merck KGaA’s Wadeville manufacturing site, where Frankel Chemicals says it delivered 5 million Rand worth of the anti-diabetic drug gliclazide in April 2008. Merck says the documents stating this are forged

Sandoz is seeking legal advice over similar documents that it believes to have been falsified and is also now seeking to distance itself from the system that brought Frankel Chemicals into existence. ’In South Africa, it has been pharmaceutical industry practice to use an agent or broker for APIs,’ Chris Lewis of Sandoz told Chemistry World. ’Sandoz South Africa is implementing a strategy to minimise the use of such agents.’