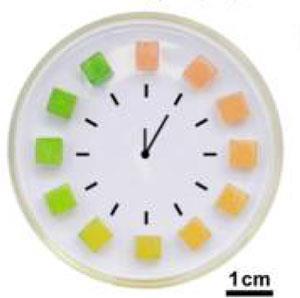 If you’ve ever accidentally put spoilt milk in your tea or on your cereal you’ll know it’s an experience you don't want to repeat. Chinese scientists have developed a colourful packaging display that could give you a better chance of avoiding an unpleasant breakfast experience.1

Use by dates assume that perishable products like milk are transported and stored at 4°C but things don’t always work out that way. Be it power cuts, employee error or a roundabout trip home from the shop, milk can often warm up and that speeds the growth of bacteria that can spoil it.

Expensive electronic time-temperature indicators are available to monitor the temperature history of a product but are more useful for shops monitoring entire shipments than shoppers worried about individual products. Plasmonic crystals that change colour over time could be a low cost alternative, according to a team from Peking University and The Chinese University of Hong Kong.

Suspensions of plasmonic crystals have been used to create colours well before people understood the science behind the phenomenon. Most famously, gold nanoparticles are what give stained glass their ethereal ruby reds. Those strong, easily distinguished colours, say the team, are what make plasmonic crystals ideal for displays on food packaging.

Gold nanorods suspended in agar gel are red, but adding silver nitrate and acid to the gel will gradually turn it green as the silver coats the nanorods. Adjusting ratios of the two allowed the team to calibrate the colour change to the growth rates of bacteria. And because silver deposition is a kinetic process the colour change speeds up as the gel gets warmer, just as microbial growth increases. 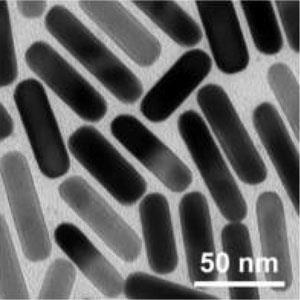 In 2010, Younan Xia’s group at the Georgia Institute of Technology, US, published a related approach that used suspensions of triangular silver nanocrystals that changed colour as the edges dulled.2 However, Xia has since shelved his work. The problem, he says, is that ‘we have to make sure the etching or growth will follow exactly the same pathway when the nanoparticles are subjected to different conditions. Otherwise, the indicator might provide some wrong information.’ He says that this will also be a problem for the Chinese group.

Of course, gold and silver aren’t cheap and Xia cautions that gold is too expensive for such a ‘low end’ approach. ‘I believe our approach, purely based on silver, should have a better chance for commercialisation if there is any,’ he adds.

But Jianfang Wang, who worked on the milk monitor, disagrees, explaining that ‘we have estimated that most of the expense comes from the "auxiliary ingredients" like stabilising and reducing agents, rather than the "main ingredients" – gold and silver.’ Not least, he says, because so little of the metals are needed.

The Chinese team are now looking to improve their approach and find a company to collaborate with.