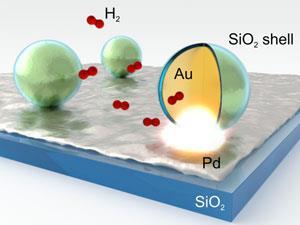 German and Chinese scientists have monitored reaction kinetics in high resolution and real time using silica-coated gold nanoparticle ‘plasmonic smart dust’. Laura Na Liu from Max Planck Institute for Intelligent Systems in Stuttgart, Germany and her team tracked hydrogen storage on palladium surfaces using the dust.1 That system could be deployed in clean energy applications, though Liu stresses that the dust could be widely used. ‘We hope that our results will pave the way towards developing inexpensive and high-output reaction sensors for real world applications,’ she tells Chemistry World.

The researchers exploited gold’s ability to trap and concentrate light, creating oscillations in the electron cloud at its surface called surface plasmons. Plasmons’ properties vary according to the chemical environment near the surface. Liu and her fellow scientists have already studied hydrogen storage by putting palladium nanoparticles near gold plasmonic nanoantennas patterned onto a flat surface.2 They monitor hydrogen uptake through a dark-field microscope that collects only light scattered by the nanoantennas. The scattered light reveals the light wavelength forming the surface plasmon, and how it changes as hydrogen adsorbs and dissociates.

Gold nanoparticles could be more versatile than nanoantennas, but need an outer coating to protect them from the chemicals being monitored, and must be highly uniform. ‘Shell thickness and size distributions have to be very homogeneous to allow reliable and reproducible measurements,’ Liu says. Therefore high-quality, core shell gold–silica nanoparticles made by chemists at Xiamen University, China, are a ‘crucial’ part of the smart dust platform, she adds.

Team member Andreas Tittl, from the University of Stuttgart, Germany, monitored hydrogen storage both using this dust on a palladium surface, and separately with palladium-coated gold–silica nanoparticles. In both cases plasmon resonances changed within seconds of exposing the palladium to hydrogen, responding more strongly to higher hydrogen concentrations.

Liu’s team will now use these advantages to look beyond hydrogen storage. ‘A plethora of chemical reactions on surfaces can be investigated,’ she says.  ‘Currently, we are focusing on reduction and oxidation steps that take place in fuel cells as well as on certain processes associated with catalytic water splitting.’