Mucus is an effective barrier to sustained local drug delivery at sites such as the lungs: large drug-releasing particles become trapped in the upper layers of the mucus and are rapidly eliminated; small drug molecules pass readily through the mucus but are then quickly absorbed into the circulatory system and removed from the locally diseased tissue.

The team, led by Justin Hanes at Johns Hopkins University in Baltimore, focused on synthetic nanoparticles made from poly(lactic-co-glycolic acid), which has been approved for use in drug delivery. 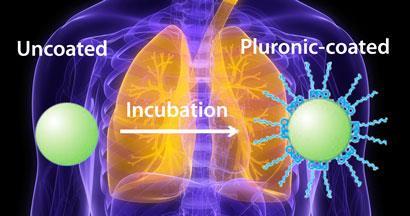 On their own, the particles do not penetrate the deep mucus layers and are quickly removed. The team had previously shown that coating particles with the uncharged hydrophilic polymer poly(ethylene glycol) (PEG) could significantly improve the particle’s diffusion through mucus. However, attaching PEG requires a covalent bond, creating what regulatory authorities class as a new chemical entity, which needs expensive and time consuming tests for approval.

To get around this, the researchers incubated the particles with a copolymer consisting of two lengths of PEG sandwiching a segment of poly(propylene oxide) (PPO). These triblock copolymers, PEG-PPO-PEG, are known as Pluronics and are ’generally recognised as safe’ by the US Food and Drug Administration.

The hydrophobic PPO part of the copolymer adsorbs to the surface of the nanoparticle, leaving the PEG portions sticking out to coat the particle. Because the association between the polymer and particle is non-covalent, the system is not classified as a new chemical entity.

Satyanarayana Somavarapu of the University of London’s School of Pharmacy describes the study as ’excellent’ and says that the improved rate of diffusion provided by simply treating the nanoparticle with Pluronics ’shows tremendous potential in overcoming one of the key barriers to nanoparticle delivery systems where there is mucus’.