A reaction best known for the attractive swirling patterns it produces in a Petri dish is more than just a pretty face, chemists in Japan have shown. The researchers have found that the oscillating chemical waves of the Belousov-Zhabotinsky reaction are strong enough to carry a cargo, driving it along a length of smart polymer tubing using contractions - just like an intestine.

Belousov-Zhabotinsky reactions were first discovered in the 1950s and are an eye-catching example of a chemical mixture out of thermodynamic equilibrium. As the reaction’s colourful components oscillate from starting material to product and then back again, spirals radiate across the Petri dish as the different components diffuse through the reaction mixture. 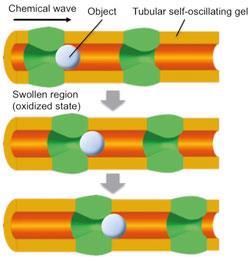 To put the Belousov-Zhabotinsky reaction to work, Yusuke Shiraki and Ryo Yoshida at the University of Tokyo have incorporated a key component, the ruthenium catalyst, into an N-isopropylacrylamide polymer gel. When the researchers drop this gel into a solution of malonic acid, sodium bromate and nitric acid, the oscillating reaction mixture causes muscle-like contractions to travel in waves through the gel.

The phenomenon is driven by redox swings in the reaction mixture, as ruthenium(II) is first oxidised to ruthenium(III) by bromate and reduced back again by malonic acid. Because ruthenium(III) increases the polymer’s hydrophobicity, the gel swells at that point.

Ryo first harnessed the Belousov-Zhabotinsky reaction within a smart polymer in the mid-1990s. At the time he was studying responsive polymer gels that reacted to external stimuli such as temperature change or pH change, for applications such as drug delivery systems and actuators. ’I thought it would be very interesting if I can cause periodical swelling-deswelling of gels without any on-off switching of external stimuli,’ he says.

The redox swings of the Belousov-Zhabotinsky reaction turned out to be ideal for driving the process. ’So far we have already achieved the oscillation on several scales between nanometre and centimetre, from polymer chain to bulk gel,’ Ryo says. The team’s latest research shows that by coating the ruthenium-impregnated polymer onto the internal surface of a glass capillary, they can form a tubular self-oscillating gel that swells and shrinks in waves. Stripping away the glass template using hydrofluoric acid, and immersing the tube in the Belousov-Zhabotinsky mixture, the team showed that the tube’s peristaltic motion could drive a bubble through the tubing.

’It’s a logical extension of the work that these researchers have done before with oscillating gels - this time potentially putting it to good use,’ says Geoffrey Spinks, who researches polymer-based actuators and sensors at the Intelligent Polymer Research Institute at Wollongong University, Australia. ’You could see clearly a directional pumping action inside these tubes, moving fluids and bubbles at a controlled speed.’

The most immediate use for the material could be within lab-on-a-chip devices. ’Autonomous mechanical pumping systems in microchannels to transport an inner fluid or materials might be the most realistic application,’ says Ryo. So far, the researchers have only demonstrated that the reaction mixture itself can be pumped along the tube, but it should be possible to modify the polymer so that the Belousov-Zhabotinsky reaction mixture fuelling the process sits outside of the tubing and another liquid is pumped through the centre.

’It seems logical that you could overcome that problem,’ says Spinks. ’For microfluidic, lab-on-a-chip type applications, this would be pretty useful, because the tubes act as the plumbing but also as a pump, so you don’t need a separate pumping chamber,’ he says.

In the longer term, the gel tubing’s autonomous peristaltic pumping motion also hints at other potential applications. ’The intriguing part is, can it also eventually have medical applications, used as intestines or arteries and so-on,’ Spinks says. In the mean time, Ryo is working on more practical considerations. ’The next step is to design the chemical and physical structure of the gel more precisely for more effective oscillation,’ he says.