Development of new synthesis method for high molecular weight polymer, which could be used to lubricate joints 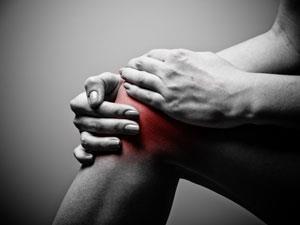 The polymer is similar to hyaluronic acid, which the body produces to help lubricate the knees

Mark Grinstaff and a team from Boston University have developed a way to make high molecular weight poly(7-oxanorbornene-2-carboxylate). The polymer has carboxylate side groups, and so is chemically similar to hyaluronic acid, which is a natural carbohydrate-based polymer that makes up part of the synovial fluid that helps lubricate articular joints like knees.

A few years ago, Grinstaff explains, the group worked out some tweaks to the ring-opening metathesis polymerisation (ROMP) reaction that they were using to make their polymer. This allowed them to make much longer chains. ‘Instead of having molecular weights of 1–200,000, we could get up to 2.5 million,’ he says. ‘When the polymers get that large, the rheological properties change – we noticed when we dissolved them in water they were slippery to the touch.’

This led the team to think about how the polymer might be useful as a replacement lubricant in the joints of people with osteoarthritis. The idea is to develop a product that could be injected into someone’s knee, for example, to help reduce pain and put off the need for total knee replacement surgery.

Grinstaff explains that the high molecular weight means that the polymer will stay in the joint for longer, rather than diffusing out through the cartilage. The fact that it is not based on a carbohydrate skeleton also means it doesn’t get broken down by enzymes present in the synovial fluid. This also helps it stay in the joint for longer to exert its lubricating effect, unlike currently used products, which are based on solutions of cross-linked hyaluronic acid

‘It’s an interesting approach,’ says Philippa Cann from Imperial College London, UK. However, Cann raises concerns about drawing extensive conclusions from the rheological experiments described in the paper. ‘These polymers need to be tested under more physiologically relevant conditions,’ she adds.

And while the team has performed some experiments using the polymer on human cartilage taken from cadavers, Cann points out that there is a significant difference between this and injecting the polymer into a joint where there is already synovial fluid present, and where the cartilage may already be damaged. ‘It’s important to understand what kind of interactions the polymer might have with what’s already in the joint,’ she says.