Nanogenerators that can scavenge energy from movement have come a step closer, after researchers in the US, Germany and China described the most efficient examples of such devices yet made.

The nanogenerators in question are based on organic nanofibres made from a piezoelectric material that create a current when put under mechanical strain. Similar devices have previously been demonstrated with nanoscale inorganic wires fabricated from ZnO or BaTiO3, but by using poly(vinylidene fluoride) (PVDF) instead, Liwei Lin and his team at the University of California, Berkeley (UCB), gained several advantages.

Using PVDF makes a highly flexible and robust device, and allowed the UCB team to develop an elegant assembly method. PVDF is usually made in thin films, but to trigger its piezoelectric characteristics, it needs to be mechanically stretched and electrically poled.

When the plastic film that the aluminium tape and PVDF fibre rest on is bent, the alignment of the dipoles shifts, creating a potential difference at the fibre’s ends. The polymer is an insulator, so current does not flow through the nanogenerator fibre itself, but electricity can flow when the two ends are connected into a circuit. 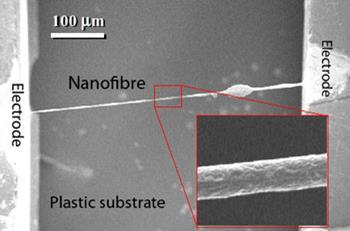 The nanogenerator, based on a 1?m diameter, 600?m long, poly(vinylidene fluoride) fibre

The maximum energy conversion efficiency Lin’s team achieved was 21.8 per cent, with an average of 12.5 per cent. ’That is much greater than the 0.5 to 4 per cent achieved in typical power generators made from experimental piezoelectric PVDF thin films, and 6.8 per cent in nanogenerators made from ZnO fine wires,’ Chang told Chemistry World.

’The key advance made here is the enhancement of energy conversion efficiency to 20 per cent,’ agreed Zhong Lin Wang, who pioneered the development of ZnO piezoelectric nanogenerators at the Georgia Institute of Technology, US. ’This is a great accomplishment, which shows that converting mechanical energy can be an effective way to provide power in the future, especially for self-powered nano- and micro-systems.’

Lin, Chang, and their co-workers foresee power sources for wireless sensors and clothes that can charge portable electronics based on their nanogenerators, although more work must be done first. ’We think the efficiency likely could be raised further,’ Lin says. ’For our preliminary results we see a trend that the smaller the fibre we have, the better the energy efficiency. We don’t know what the limit is.’