Polymer replacement for the hydration shell 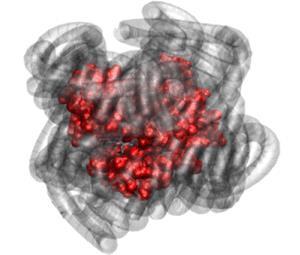 The sheath of water molecules, called a hydration shell, that gives protein molecules the flexibility to do their catalytic job can be replaced by polymers, according to Adam Perriman of the University of Bristol and his coworkers.1 The findings challenge a long-standing belief that some hydration is needed to keep a protein functional by ‘feeding’ its dynamical fluctuations.

Perriman and his colleagues at Bristol have previously shown how to make essentially solvent-free ‘liquid proteins’ in which the protein molecules are surrounded by polymer surfactants – long-chain polymers with a negatively charged group at one end, which form complexes with positively charged regions on the protein surfaces.2 The researchers call these assemblies nano-hybrids. Although they have just a few water molecules per protein remaining – negligible compared to the several hundred in a full hydration shell – Perriman and colleagues showed that a myoglobin nano-hybrid could still bind oxygen, as ordinary hydrated myoglobin does in living tissues.3

The continued function of more or less water-free proteins was not in itself a total surprise. Jeremy Smith at Oak Ridge National Laboratory in Tennessee and coworkers have shown, for example, that an esterase enzyme can keep working with just one or two water molecules per protein, even though its usual dynamics are suppressed in that state.4 And Perriman and colleagues point out that some enzymes will function in non-aqueous solvents, while, even in living cells, membrane proteins are mostly surrounded by the lipid molecules of cell membranes rather than by water.

But these could be exceptions, and there’s been good reason to think that, in general, proteins do need water to work properly. A protein and its hydration shell seem to perform an intimate dance in which the dynamical motions are closely coupled, and a common view is that the water molecules ‘inject’ the kind of conformational looseness into the protein that it needs as it carries out its catalytic role. Moreover, the interconnected network of hydrogen bonds in the hydration shell creates ‘cooperative’ motions of many molecules that should be very hard for any other solvent to mimic.

With that in mind, Perriman teamed up with Martin Weik and his coworkers in Grenoble, France, to investigate the dynamics of a functional nano-hybrid using neutron scattering at Grenoble’s Institute Laue-Langevin.  So-called incoherent scattering results from neutrons scattered from the same atom in a sample at different times, and so it probes atomic motions on timescales of a few picoseconds to nanoseconds. Because incoherent neutron scattering is strongest from hydrogen atoms, it has been often used to look at the motions of proteins and their hydration shells. 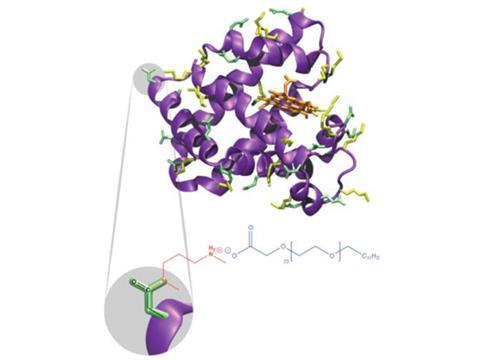 The researchers found that the dynamics of myoglobin in the polymer hybrid look very similar to those of ordinary myoglobin in water, while the motions of the polymer coating – comprising a few tens of polymer molecules per protein – resemble those of a hydration shell. The polymer coat ‘substitutes functionally and dynamically for a hydration shell and ensures [protein] flexibility and conformational dynamics’, they conclude.

‘It’s still a mystery to me what the microscopic mechanism is by which the polymer corona is able to replace water,’ Weik admits. Computer simulations have suggested that the translational diffusion of hydration water is primarily what plasticises the protein. ‘I can't see how the polymer segments can undergo similar diffusive motions,’ Weik says. He plans more neutron-scattering experiments, as well as simulations, to explore the nature of the polymer motions in comparison to those of hydration shell water.

Perriman thinks that these ‘liquid proteins’ could be useful for biotechnology and biomedicine. For example, storing proteins in a water-free environment might promote long-term stability. What’s more, Perriman points out that ‘the protein concentration is extremely high, and applying this highly concentrated liquid protein topically could be advantageous for surgical wound dressing.’ The Bristol team has also recently demonstrated that functional, solvent-less ‘liquid viruses’ can also be made using the same strategy.5

There could also be more profound, astrobiological implications for the new findings. Even though polymer surfactants are far too exotic to be plausible solvents on other worlds, the fact that the exquisite dynamics of hydration shells can be reproduced by a non-aqueous system does cast some doubt on the often supposed centrality of water for life.

But Smith is cautious. ‘In both in the polymer surfactant and our solvent-free esterase systems the activity measured, though non-zero, was very low indeed,’ he says. ‘Hence water does have an important effect on protein function, and its potential uniqueness as a protein solvent can’t yet be discarded.’