Scientists have found that six polymer alternatives to DNA can pass on genetic information, and have evolved one type to specifically bind target molecules.1 They say that their work reveals both broader chemical possibilities for these key life functions and provides a powerful tool for nanotechnology and medicine. 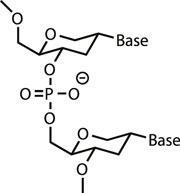 ’There is no overwhelming functional imperative for life to be based on DNA or RNA,’ says Phil Holliger from the MRC Laboratory of Molecular Biology in Cambridge, UK, who led the team. ’Other polymers can perform these functions, at least at a basic level.’ Holliger’s team’s xeno-nucleic acid (XNA) polymers each replace DNA’s ribofuranose sugar ring with six other cyclic structures that can still form helical chains and base pairings. But rather than using relatively inefficient chemical synthesis, the scientists wanted to exploit polymerase and reverse transcriptase enzymes to copy genetic information from DNA templates to XNAs. In living organisms, polymerases can make RNA from nucleotide monomers using existing DNA strands as templates. Reverse transcriptases can then create a copy of the original DNA strand from that RNA in the same way.

Yet those processes don’t normally work with the kind of unnatural nucleotides the team used. Consequently, MRC scientist Vitor Pinheiro first mutated and then selected polymerase enzymes that best processed 1,5-anhydrohexitol nucleic acid (HNA) and cyclohexenyl nucleic acid (CeNA) nucleotide trisphosphates. As well as isolating an enzyme that would make long enough polymers with all six XNA types to encode genetic information, he similarly engineered reverse transcriptases. Together the enzymes could accurately replicate genetic information from DNA to XNA and back, but with enough copying mistakes for functions to evolve. ’For the best ones it’s 99% accurate or better,’ Holliger tells Chemistry World. ’You really don’t need more than that.’ 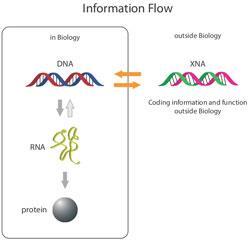 Repeated replication cycles were then used to evolve potent HNA aptamers, molecules that could act as drugs by recognising and binding to specific targets. In one example, starting from structures similar to DNA and RNA aptamers for HIV trans-activating response RNA (TAR), the team isolated HNAs that might be able to target HIV. These HNAs were then converted to DNA and back again, selecting for affinity to TAR over eight rounds of evolution, after which common genetic motifs emerged. ’Aptamers have the potential to rival antibodies in some clinical settings if we can get the properties right,’ Holliger explains. ’This technology certainly has the potential to do that.’

Steven Benner, director of the Westheimer Institute  at  the Foundation for Applied Molecular Evolution in the US, notes that replacing DNA’s sugar ring complements his team’s introduction of non-standard nucleotide bases.2  ’Together, these two classes of artificial chemical systems capable of heredity and evolution represents an expansion of our theories relating to the structure of molecules and the phenomenon of genetics,’ he comments. ’It is relevant to biotechnology here on Earth as well as the possible forms that life might take throughout the cosmos.’

Jack Szostak, who investigates processes that allowed early chemical and biological evolution on the Earth at Harvard University, US, calls Holliger’s team’s work ’very exciting’. ’This is very interesting with respect to the origin of life,’ he says. ’In principle, many different polymers could serve the roles of RNA and DNA in living organisms. Why then does modern biology use only RNA and DNA? The answer probably lies in two "filters". First, only some nucleic acids could actually be made on the early Earth. Second, of those polymers that actually could be made, some may have been functionally superior to others in terms of ease or accuracy of replication, or ability to generate catalytic folded structures.’