Received wisdom tells us that taking 39 chemical components and assembling them into one molecule will only be possible with low yields thanks to entropy. But scientists have managed this with yields of 90%. This surprising result to come out of Fraser Stoddart’s lab at Northwestern University, Illinois, US, in collaboration with Lee Cronin’s group at the University of Glasgow, UK, where they’ve made self-assembling polyrotaxanes that become more stable the more rings there are around the central axle.

Polyrotaxanes are made by clipping rings around recognition sites on a central axle or dumbbell. Matthew Belowich, a student in Stoddart’s lab, made the suggestion that if the spaces between the recognition sites were reduced, pi stacking might stiffen the polymers, making them straight and useful as molecular wires. But what he wasn’t expecting was such a high level of cooperativity. ’The importance of the work veered away as Matt found things that were not anticipated,’ says Stoddart.

What seems to be happening is that as the rings add onto the axle, cooperativity increases as pi stacking increases. Once a certain point is reached, the reaction can’t help but complete, just as starting to do up a zip can be tricky but once you’ve started it all lines up and becomes easier and easier. 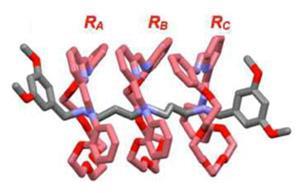 As Ron Smaldone, the computational chemist of the lab points out, although ’Matt’s molecule in some ways looks like a DNA it’s really not at all like DNA, but its assembly properties are actually pretty similar, in some ways, to DNA’. Of course, Belowich wasn’t trying to mimic natural products or the self-catalysing nature of life. But this does show that smart assembly can be mimicked using natural concepts. However, there’s still a lot of work to be done to understand this area of dynamic covalent chemistry, which is ’still very much in the dark ages’, according to Stoddart.

How these rings add onto the axle is still not understood, though. ’We know what happens at the very beginning and what the outcome is but for everything in between we have blindfolds on,’ says Belowich. ’With just one ring, it is difficult enough and you can imagine with 19 rings it’s just impossible right now.’

’These results reveal that with proper design the host-guest systems that have been developed over the past couple of decades are capable of self-assembling into elegant and potentially useful polymeric systems via dynamic covalent chemistry,’ says Harry Gibson, who works on rotaxanes at Virginia Polytechnic Institute and State University, US. ’I look forward to the next generation of fascinating materials to emerge from application of these principles.’

As well as hoping to understand more about what’s going on during the self-assembly, Stoddart is sure that there will be applications, perhaps by adding porphyrins to the rings to make self-assembling, molecular wires. ’The sky would seem to be the limit,’ he says ’my instinct would be to stick with it and elaborate.’