Porphyrins can be turned into customisable molecular nanomagnets 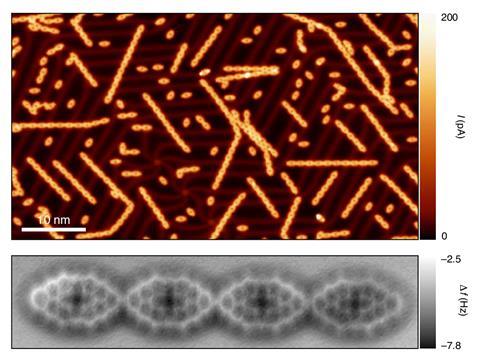 Strings of porphyrins were created using atomic manipulation. These chains could be used in data storage applications

By tuning the magnetic properties of porphyrin chains, researchers are gaining new insights into materials that could be used in data-storage and quantum computing.

A research team led by Xiaodong Zhuang and Shiyong Wang from Shanghai Jiao Tong University in Shanghai, China, prepared porphyrin chains on a gold surface. Using microscopy techniques applied in atomic manipulation, they could selectively remove hydrogen atoms from the molecules to create radical species. This enabled the team to tune the magnetic coupling within the molecules.

The removal of each hydrogen atom alters the hybridisation character of the carbon it was bonded to – from sp3 to sp2 – and adds a delocalised π radical into the porphyrin’s aromatic system. This creates ‘considerable’ magnetic coupling within the porphyrin unit, as well as between the neighbouring porphyrins units in the chain.

The team note that molecular nanomagnets are ‘promising candidates for information storage, molecular spintronics and quantum computing’, with porphyrins being particularly attractive due to their stability, chemical versatility and their ability to coordinate to different ions. By showing how to tune and measure the magnetic properties of porphyrin chains, the researchers hope that their work provides ‘a widely engineerable platform to further explore the exotic phases of quantum magnetism in real space’.