The study of uranium chemistry should become significantly easier thanks to researchers in the US who have discovered a simple way to make key precursors to a wide range of low valency uranium compounds.

A deep understanding of uranium chemistry is important not only for developing improved nuclear fuel cycles, but because the element has also shown promise in materials such as superconductors and catalysts. Uranium complexes are highly sensitive to water and air, but the only viable syntheses started from aqueous reactions of uranium oxides with harsh chlorinating reagents at high temperatures. 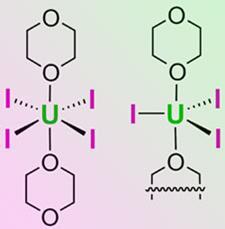 The 1,4-dioxane derivatives of uranium iodides are easy to make and can be converted into a range of other compounds

’Uranium’s aqueous chemistry has been studied for a long time, but getting into non-aqueous chemistry has been limited to a very few stable compounds,’ says Jaqueline Kiplinger of the Los Alamos National Laboratory in New Mexico, who led the research. Currently the most popular starting materials for synthetic uranium(III) and -(IV) chemistry are UI3(tetrahydrofuran)4 and UCl4. Synthesis of both of these compounds requires exacting or toxic reaction and storage conditions and produces low yields.

Kiplinger’s team has borrowed a technique they demonstrated for thorium chemistry and applied it successfully to uranium. Simply incubating uranium metal turnings with iodine in a solvent of 1,4-dioxane, the researchers synthesised the dioxane derivatives of UI3 and UI4. ’We could not believe how easy it was in a glove box, obtaining 90 per cent yields in a very clean synthesis,’ Kiplinger says. The key, she believes, is the 1,4-dioxane - which is highly resistant to degradation by ring-opening, unlike tetrahydrofuran.

The dioxane complexes in turn were used to make a wide range of other uranium compounds, including alkoxides, halides, amides, nitrides and carbides.

’The time required and yields we obtained were far better than existing pathways to these types of compounds,’ says Kiplinger. ’I believe this will open the door to a whole lot of new uranium chemistry.’

Stephen Liddle, who researches uranium chemistry at the University of Nottingham in the UK, agrees. ’Historically this area has lagged behind many others, and one reason is the lack of suitable precursor materials,’ he says. ’Hopefully these alternative uranium halides will help open up the area in general by leading to new compounds.’