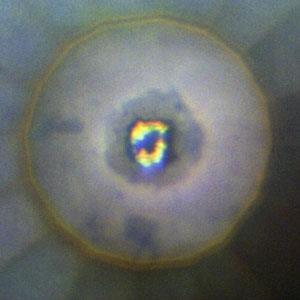 By squeezing iridium and hydrogen together under ultra-high pressures, researchers have produced a novel metal hydride with an unusually high hydrogen content and an unconventional structure.

Metal hydrides have excited interest in recent years as a potential way to store hydrogen, and though it is unlikely that a metal as dense and expensive as iridium could be a practical hydrogen storage vehicle, the work could suggest routes to the design and synthesis of new hydrides.

The team, led by Eugene Gregoryanz at the University of Edinburgh in the UK, enclosed hydrogen and iridium in a diamond anvil cell, which is capable of generating enormous pressure. The sample was gradually compressed and laser-heated, while being monitored by x-ray diffraction. At 55GPa – more than half a million times Earth’s atmospheric pressure – the team noticed a change in the diffraction pattern.

Iridium crystals are face-centred cubic, with an atom at each corner of a cube and one at the centre of each face. At 55GPa this structure apparently changed to a simple cube, with no iridium atoms occupying the faces. While hydrogen atoms are effectively invisible to x-rays, theoretical calculations suggest that the hydrogens occupy the faces of the lattice. This is unprecedented in metal hydrides, where the hydrogen occupies spaces within the lattice between the metal atoms  in a so-called interstitial configuration. The calculations show that this non-interstitial structure would have three hydrogens per iridium – IrH3 – whereas most related metal hydrides have a ratio of 1:1 or occasionally 1:2. 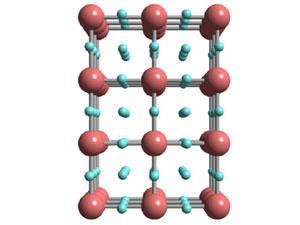 ‘We think the hydrogens are on the faces of the cube, but we do not know for certain,’ says Gregoryanz. Calculations support the presence of a simple cubic lattice, albeit distorted, but the precise geometry has yet to be determined. ‘The structure is highly unusual, and at the moment it has totally unknown properties,’ he adds.

Commenting on the work, Robert Crabtree, an expert in iridium chemistry at Yale University in the US, says that the formation of IrH3 is ‘an impressive example of what can be achieved’ using high pressure techniques.

Ashkan Salamat at Harvard University in the US, who works on high-pressure systems, says: ‘The high hydrogen content in a noble metal hydride  is an important observation in the pursuit for hydrogen storage materials and demonstrates the possibilities of accessing unique compositions through the interplay of high pressure and temperature. With the ability to conduct these types of laser heating experiments in the diamond anvil cell at synchrotron radiation facilities, researchers will be able to further explore directly the possibilities of new metal hydrides and material synthesis at the most extreme chemical conditions.’