A molecular rotor whose spin can be accelerated 10-million-fold when its mechanism is ’lubricated’ by protons has been synthesised by chemists in the US. The work offers an elegant new way to control the motion of molecular machines.

The rotor, created by Ken Shimizu’s team at the University of South Carolina in Columbia, consists of quinolone and succinimide rings linked by a single bond which allows the rings to rotate relative to each other. 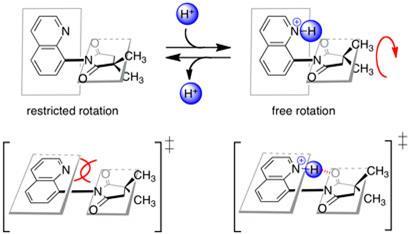 ’In neutral solution the rotation is very, very slow,’ says Shimizu. The reason for the sluggish spin-rate is that the two rings repel one another as their planes begin to align. Specifically, a carbonyl oxygen on the imide ring is repelled by the quinolone nitrogen. ’The nitrogen and the oxygen do not like to be next to each other,’ he explains.

However, when the medium is acidified the rotation accelerates to up to 10 million times faster than when the solution is neutral. Molecular modelling and nuclear magnetic resonance (NMR) studies point to the mechanism of this proton-mediated acceleration. ’The hydrogen initially attacks the quinolone nitrogen,’ Shimizu explains. ’As the imide ring rotates, the carbonyl oxygen interacts with this hydrogen helping to overcome the repulsion. There is still some repulsion, but it is a lot lower. The hydrogen bond formed between the newly introduced hydrogen and the imide carbonyl stabilises the planar transition state of the molecule.’

Because of the way the hydrogen eases the rotation, the team has coined the term ’proton grease’. When the solution is neutralised by addition of base, the effect is reversed and the rotation resumes its plodding pace.

’People are always looking for ways to control molecular machines such as these, and this represents one approach,’ says Shimizu. ’A number of molecular rotors have been reported, but normally the issue is how to slow the rotation down rather than speed it up.’

Commenting on the work, Charles Sykes, who studies molecular rotors at Tufts University in Massachusetts, US, says, ’It’s a somewhat non-intuitive result that is explained with the help of some calculations.’ Sykes adds, ’More methods like this for external control of molecular dynamics are needed if we are to realise a new generation of molecular devices and sensors.’