Under intense pressures like those found on Uranus or Neptune ice may behave in very different ways, even giving rise to magnetic fields 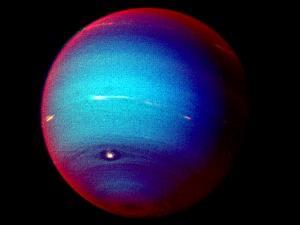 If you squeeze ice hard enough, its protons fall off. That’s the conclusion of a new study by Malcolm Guthrie of the Carnegie Institution of Washington and colleagues. They used neutron scattering to look at ice while it is compressed between the teeth of a diamond anvil cell to pressures of more than 50 gigapascals (GPa) – equivalent to that in the depths of the Earth’s lower mantle. They find that under these conditions some of the protons in the water molecules become detached and take up positions in the small voids between the molecules.

The researchers say that the stray protons might have important implications for the nature of the icy interiors of the gas-giant planets such as Neptune and Uranus. It has been previously proposed that this ice might enter a ‘superionic’ phase in which there are relatively mobile hydrogen ions that can support proton currents and give rise to magnetic fields. The new findings suggest that such a phase might begin to form in a different manner from what was thought, and perhaps at a lower temperature.

‘If the results are correct – and that still needs to be demonstrated – then they have profound consequences for a huge amount of what we know about ice at high density, including its conductivity inside giant planets,’ says John Loveday of the University of Edinburgh, UK, a specialist on high-pressure solid-state physics.

The findings go against prevailing wisdom on how ice behaves under high pressure. The previous assumption was that, as the water molecules – connected in a three-dimensional network of hydrogen bonds – get squeezed closer together, eventually the hydrogen atoms will sit midway between two oxygens. So instead of being covalently bound to one and hydrogen-bonded to the other, it is bound equivalently by both. In this symmetrical arrangement, the water molecules lose their individual integrity.

But Guthrie and colleagues say that some water molecules fall apart well before that symmetrical arrangement is reached. Using neutron diffraction to locate where the protons are situated, they found that above about 13GPa some of these protons break away from their parent molecules and sit in ‘interstitial’ sites: small cavities within the hydrogen-bonded network. 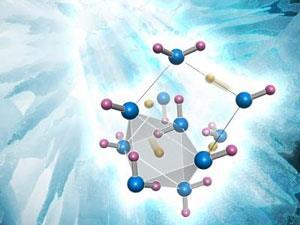 In ordinary ice, called ice-I, there are large cavities in the middle of six-membered rings of water molecules. But at these high pressures ice adopts a different, denser structure called ice-VII, in which there are two, somewhat disorderly, interpenetrating networks. Guthrie and colleagues say that their new form of ice is like ice-VII but even less orderly, with some protons on average sitting in sites octahedrally coordinated to six oxygens. ‘This is another way in which density can be increased,’ explains Guthrie.

‘Current theory doesn't seem to predict this happening,’ he adds. ‘So there's a possibility that we've uncovered some new physics, possibly some quantum effect that allows the protons to “slip from the net” as it were.’ Another possibility is that the results simply won’t stand up, and Loveday reserves judgement. ‘The work is contrary to all expectation as to what will happen,’ he says. ‘That is of course not an argument to reject it, but it’s a reason to be skeptical. This is an extraordinary claim and it requires extraordinary proof.’

To study the high-pressure structure, the Carnegie team had to adapt their diamond-anvil cell to support neutron scattering in the sample. ‘We designed a new cell with about a 100 times larger volume than previous designs,’ says Guthrie. ‘This is still tiny for neutrons, so the second key was to use the high neutron flux of the Spallation Neutron Source at Oak Ridge National Laboratory. It still took around three years to get the technique working.’