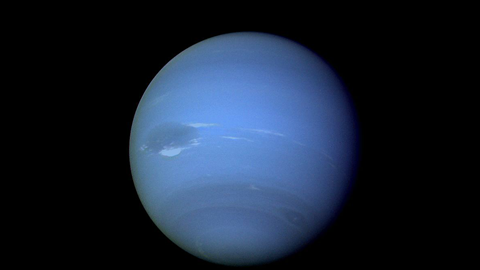 Trihydrogen oxide (H3O) – a metallic liquid stable at extreme pressures and temperatures – could be what’s powering the strangely wonky magnetic fields of Neptune and Uranus.

The planets’ magnetic fields are offset from the their physical centre and strongly tilted relative to their rotational axes – 47° on Neptune and 59° on Uranus. Whereas Earth’s magnetosphere is generated in its molten iron core, neither Uranus nor Neptune has such a structure. Both ice giants are thought to contain a solid core surrounded by a metallic liquid layer powering an internal dynamo. But the nature of this layer remained elusive.

In quantum mechanical calculations, scientists have discovered that the magnetosphere-generating layer could be made up of trihydrogen oxide. The unlikely compound forms when water and hydrogen meet under the extreme conditions inside the planets – up to 600GPa and 7000K (6727°C).

H3O starts solidifying at around 450GPa at 1000K. It has a clathrate-like structure that consists of a hydrogen–oxygen framework with dihydrogen molecules sitting inside the lattice voids.

At 3000K, trihydrogen oxide melts to form a superionic state. Here, the hydrogen ions move freely around a crystal lattice made up of oxygen ions. Water in its superionic ice form has previously been suggested as the source of the icy giants’ magnetic field. But trihydrogen oxide, which becomes a metallic fluid at 5000K and 540GPa, is much less viscous than superionic ice and therefore more conducive to powering the planets’ dynamo.

Experiments to prove the researchers’ calculations should be within reach. Techniques to create the pressures and temperatures needed to form solid H3O already exist.