Tropical rainforests release large amounts of volatile organic compounds (VOCs) into the atmosphere, including hydrocarbons such as isoprene. VOCs have their good points, biologically speaking: they repel pests and attract pollinators, for example. But they can also be harmful - most obviously in polluted air, where they combine with nitrogen oxides to make ozone, which contributes to smog. Even in clean air, however, they are oxidised by the atmosphere’s ’detergent’: hydroxyl (OH) radicals produced by the action of solar ultraviolet on ozone. Above a rainforest, large amounts of VOCs might dangerously deplete levels of OH radicals, atmospheric models had predicted - meaning less of the cleansing agent available to mop up greenhouse gases such as carbon dioxide and methane. 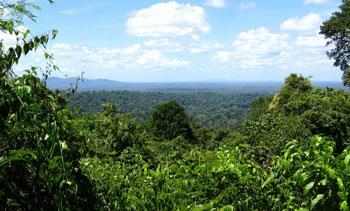 The Amazon rainforest in Suriname

Fortunately, rainforests don’t seem to be monopolising atmospheric detergent as much as expected, say scientists at the Max Planck Institute for Chemistry in Mainz, Germany. Jos Lelieveld and colleagues measured atmospheric trace gases from an aircraft over the Amazon rainforest in South America, and found unexpectedly high levels of hydroxyl radicals. The reason, they suggest, is that natural chemistry recycles the radicals, sustaining atmospheric cleansing.

’The existing models underestimated hydroxyl recycling by about a factor of ten’, Lelieveld says. ’Isoprene chemistry is complex and was not well understood’. The researchers propose that a previously overlooked reaction pathway, involving organic peroxy radicals, is responsible for a higher recycling efficiency in isoprene oxidation.

Alex Guenther, of the National Center for Atmospheric Research in Boulder, US, says the results confirm earlier indirect evidence that isoprene has a smaller effect on hydroxyl radicals than previously thought. ’The researchers propose that hydroxyl recycling can explain the discrepancy, but there is not yet sufficient evidence of this and more research is required to explain the observed high hydroxyl levels,’ he comments.

Lelieveld’s observations explain how the atmosphere has sustained its cleaning mechanism throughout geological times, but they also confirm that tropical deforestation and urban and industrial activities boost air pollution, contributing to climate change. ’The natural biosphere-atmosphere interaction is sustainable, but human influence disrupts this remarkable balance, leading to air pollution,’ Lelieveld says.