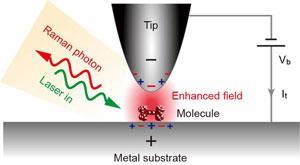 Researchers have achieved the highest resolution yet with Raman spectroscopy, allowing the chemical mapping of molecules to a resolution of less than 1nm. The technique could allow unprecedented chemical identification of single molecules.

Raman spectroscopy has been a key part of the chemist’s toolkit for decades. It makes use of the way that photons from a light shone on a molecule interact with bonds, shifting the frequency of these photons and providing a characteristic fingerprint of the molecule’s structure.

In recent years it has been shown that molecules adsorbed to metallic nanoparticles can show a significantly enhanced Raman effect because of the involvement of plasmons – electronic oscillations at the surface of metals. A subsequent extension of this approach involves using the tip of an atomic force microscope as a single, highly focused metallic surface. When it is brought to within a few nanometres of the sample under investigation, plasmonic excitation effectively creates a single hotspot of surface-enhanced Raman scattering, a method called tip-enhanced Raman scattering, or TERS. This has allowed Raman scattering to reach a resolution of around 10nm.

Now, a team led by Zhenchao Dong at the University of Science and Technology of China, has shown that this resolution can be increased dramatically using the highly controllable conditions that can be achieved with a scanning tunnelling microscope (STM).

The team adsorbed molecules of meso-tetrakis(3,5-di-tertiarybutylphenyl)-porphyrin (H2TBPP) onto a silver surface under ultra-high vacuum and low temperatures. As the tip of the STM was lowered towards the molecules, a local plasmonic field is generated within a ‘nanocavity’ between the tip and surface, as with previous approaches. However, with exquisite control of the STM tip geometry it is possible to tune the resonance of the plasmonic field to make its frequency match that of the combined electronic and molecular vibrations  – termed the vibronic transitions – of the molecule. This produces a sharply increased Raman signal from the molecule.

‘We are able to resolve a single molecule chemically with spatial resolution down to sub-nanometre scale, revealing even its internal structure and configuration on the surface,’ says Dong. ‘While other methods can provide images of single molecules, they do not tell us about the chemistry,’ adds team member Javier Aizpurua of the Spanish Council for Scientific Research. ‘This allows us to get the chemical ID of a single molecule.’

Other experts are impressed by the work. Richard Van Duyne of Northwestern University in Illinois, US, says: ‘It looks amazing. The achievement of sub-nm TERS is an extremely significant advance in this highly challenging and important field.’ Ken Crozier of Harvard University, US, notes: ‘The authors are able to observe differences between the spectrum acquired from a molecule on a step edge versus that acquired from a molecule on a flat surface. The work helps advance the field concerned with Raman scattering microscopy of single molecules.’