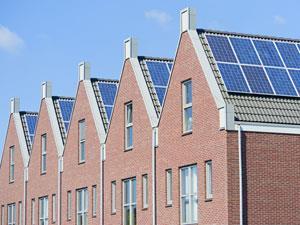 Although dye-sensitised solar cells (DSSCs) have been leading the charge in cheap-to-process cell designs, semiconducting perovskites have been used in recent years to replace the sensitiser in the DSSC architecture. Whilst this reduces the interfacial energy loss that plagues DSSCs, the metal oxide support layers still need to be sintered at 500°C, which is costly.

Continuing their work on a ‘meso-superstructured’ solar cell, where they simplified the design of semiconducting perovskite solar cells, Henry Snaith and his group at the University of Oxford have used colloidal chemistry to deposit a support layer of aluminium(III) oxide. The highest temperature this method needs is a 150°C drying step, which will not only result in cheaper devices, but could also lead to better designs.

Multijunction solar cells, with one cell synthesised directly on top of another, are a cheap way to improve device efficiency further as the two cells can specialise in different parts of the solar spectrum. Snaith says this would not be possible using earlier synthetic methods. ‘You can’t do any treatment that will disrupt the solar cell underneath and the main treatment that disrupts solar cells is temperature,’ he explains.

Neil Greenham, an expert in optoelectronics at the University of Cambridge, UK, says that the researchers’ previous work, which essentially replaced titanium dioxide with aluminium(III) oxide, allowed these new improvements. ‘Because [the Al2O3] is just essentially acting as an inert scaffold, the processing of those layers becomes less important, so they can get away with a much lower annealing temperature for those materials,’ he explains.

‘It’s more than just tweaking, these are rather important extra results,’ adds Greenham.

Although his device’s 12.3% efficiency is enough to rival the very best dye-sensitised solar cells, Snaith is still looking to improve efficiency, as well as stability, on his way to producing a commercial device.

Snaith is already predicting that his device will be much cheaper than existing silicon ones. ‘We’ve costed it out and we think, at our first level of manufacturing scale, it’ll be something like 30 cents per Watt peak. Current silicon is about $1 per Watt peak.’ ‘The main cost is actually going to be the glass,’ he concludes, ruefully.