Researchers have combined two ion-beam analysis techniques to obtain more detailed information about the composition of paints used in Renaissance works of art. The new approach sheds light on the organic components within the paint, particularly important in informing conservation efforts.

Laurence de Viguerie and colleagues at the Palais du Louvre and Institut National des Sciences et Techniques Nucl?aires in France have devised a new approach that provides quantitative information about both the elemental composition and organic binder proportions in materials used in old Italian oil paintings.

Particle induced x-ray emission spectroscopy (PIXE) is a common technique used in cultural heritage analysis, but it can only detect elements present in the materials and doesn’t provide any insight into the organic components. So the investigators combined PIXE with backscattering spectrometry to obtain, for the first time, the ratios between the organic and inorganic components of paint in a single procedure.

In backscattering spectrometry an ion beam is directed at the surface of a target and the energy of the ions that scatter back from the sample is recorded. This data can then be analysed to provide quantitative information about the composition of the material as well as depth profiles its individual components. 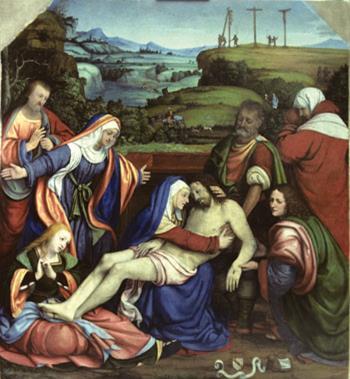 Investigators analysed samples from Pieta, now in the Louvre Museum, painted by Andrea Solario between 1504 and 1507

m in air. ’It is important to work directly in air because of potential damage [to the artworks] in a vacuum,’ explains Philippe Walter, lead author on the study. ’It is also important to have a good spatial resolution because of the thinness of the paint layers.’ The team also kept the beam intensity as low as possible, around 150 pA in runs lasting 100 to 200 seconds, to reduce the risk of damage to the paint samples.

During the Italian Renaissance, pigments were mixed with oils which held the pigment in suspension, allowing it to be applied to a canvas where it then dried. Tweaking the ingredients and preparation methods helped create different effects in the final painting. Knowing the proportions of the different ingredients is crucial in understanding the physical and chemical properties of the paint layers, say the researchers, and hence predicting their conservation.

The investigators studied several 15th and 16th century paintings from the school of Leonardo da Vinci. Focusing on paint layers based on lead white pigment, the researchers determined that the layers all had similar compositions, with the pigment making up 85 to 95 per cent of the paint, and the organic binder - known to be linseed or nut oil - making up 5 to 15 per cent. The results suggest that in old oil paint recipes, the binder proportion was kept the same for each pigment.

Narayan Khandekar of Harvard Art Museum says the research represents ’a new and interesting way to determine the pigment to binder ratio from a small paint cross-section’.

’It is a significant advance over the thermogravimetric methods developed in the early 1990s which relied on mechanically separating the layers prior to analysis, or on an analysis of all the paint layers at once.’

Walter explains that their goal is to ’find interesting data concerning the beginning of the use of oil as a binder. Did the artists immediately master this new mixture?’ As this research focused on lead white-based layers, the team suggests it could also be interesting to analyse other samples and look at coloured or organic layers.