New compounds stop the premature interruption of protein production, a cause of diseases

Israeli scientists have developed compounds that could be better treatments for genetic diseases than current drugs.

Timor Baasov and his colleagues at the Israel Institute of Technology have improved compounds used to suppress faults in genes called nonsense mutations.

Nonsense mutations, which cause more than 1800 human diseases, are alterations in the genetic code that stop protein production prematurely, leading to truncated or nonfunctional proteins. Gene therapy is one treatment, but it’s had limited success. With suppression therapy, small molecules allow cells’ protein producing equipment to skip over nonsense mutations to restore the proteins. Aminoglycosides - antibiotic amine-modified sugars - are the only clinically available drug family known to be effective in suppression therapy, but at effective doses, the compounds have high human toxicity. 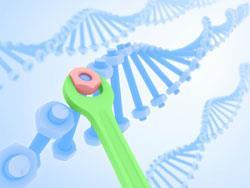 To reduce the toxicity, the team introduced a methyl group onto two aminoglycosides. They tested the new derivatives in an in vitro suppression test on six different nonsense mutations for different diseases and carried out toxicity tests on human cells. They found that the compounds exhibited significantly improved activity and reduced toxicity compared to gentamicin, an aminoglycoside antibiotic used to treat bacterial infections.

’Treating genetic disorders is one of the biggest challenges of modern medicine. The likelihood that suppression therapy could be used clinically is very feasible,’ says Baasov.

’The data emphasise the enormous potential of modified aminoglycosides for [nonsense suppression] therapy to combat nonsense mutation-based disorders with limited or no current therapeutic options,’ says Uwe Wolfrum, a cell biologist at the Johannes Gutenberg University of Mainz, Germany. ’This raises hope for future clinical trials.’