Researchers in Canada have revealed the structure of a key enzyme involved in the synthesis of bacterial cell walls. The finding opens up the possibility of developing new and improved antibiotics and overcoming the increasing problem of bacterial resistance to existing drugs, they claim.

A key target for antibiotics is the synthesis of part of the bacterial cell wall called the peptidoglycan layer. The construction of this layer requires two essential enzyme activities, a   glycosyltransferase (GT) and a transpeptidase (TP). Penicillin and other antibiotics of the same class, the beta-lactams, work by inhibiting transpeptidases - also known as PBPs, or penicillin-binding proteins.

Drug designers would like to develop new products that target the GT enzymes, but this has been difficult because there is no good structural data for these enzymes. Now, Andrew Lovering and colleagues at the University of British Columbia in Vancouver, have crystallised a GT enzyme from the pathogenic bacterium Staphylococcus aureus and elucidated its three-dimensional structure1. In fact, the enzyme is bifunctional - it has both GT and TP activities. The enzyme, called PBP2, resembles a dumbbell, with the two activities separated by a central link. Significantly, Lovering’s team also obtained the structure of the GT portion of the enzyme while it was bound to an inhibitor, moenomycin, revealing which amino acids of the protein are involved in the catalytic processes and therefore represent targets for inhibition. 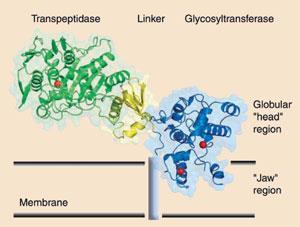 The overall structure of PBP2

’These two structures now provide a basis for addressing further questions about the mechanism of this important family of enzymes and for the design of new antibacterials,’ the researchers said.
In a commentary accompanying the report2, Gerard Wright of McMaster University in Ontario, Canada, noted, ’This structure is regarded as the Holy Grail for antibiotic drug discoverers and bacterial physiologists’.

Waldemar Vollmer, a bacterial cell-wall expert from the University of Newcastle, UK, told  Chemistry World, ’While the transpeptidation reaction is the target of one of the most important classes of antibiotics - the beta-lactams - there is no therapeutically relevant antibiotic inhibiting transglycosylation. The search for new antibiotics targeting bacterial cell wall biosynthesis as well as basic cell-wall research has been hampered by the very low number of available crystal structures of cell wall synthetic enzymes, all of which are transpeptidases. For the first time we have now available the structure of a peptidoglycan glycosyltransferase, a breakthrough in our research field.’

Vollmer added, ’Lovering et al present two fascinating structures of PBP2, with and without the bound inhibitor moenomycin. Based on these structures the authors have identified amino acid residues participating in substrate binding and catalysis. The insights into the catalytic mechanism will allow the application of modern strategies for the discovery of drugs targeting the transglycosylation reaction.’