US researchers have cracked one of the most baffling mysteries in materials science - why diamond, the supreme insulator, becomes a conductor under certain conditions.

Diamond produced by chemical vapour deposition is typically coated with a layer of hydrogen atoms. Around 20 years ago, scientists noticed that if such diamond is exposed to air its surface becomes electrically conductive - but no-one has been able to explain why.

Now, a group led by John Angus at Case Western Reserve University in Ohio has solved the puzzle. The phenomenon arises because of an electrochemical reaction on the surface that occurs in a thin layer of water only a few molecules deep.

’An electrochemical explanation was put forward by a German group a few years ago,’ Angus told Chemistry World. ’But it was controversial because diamond is extremely hydrophobic, making the presence of water unlikely, and the energetics of the electrochemistry were not entirely convincing.’ However, Angus thought the German researchers were onto something and the new work has confirmed this. 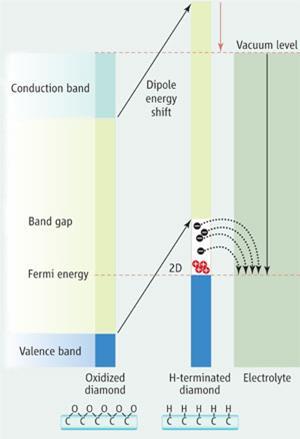 The US researchers have shown that water can form a film on diamond due to various surface phenomena including electrostatic interactions. When exposed to air, oxygen and carbon dioxide dissolve in the water. A redox couple (O2+4H++4e-

2H2O) is established in the aqueous phase consisting of the dissolved oxygen and protons arising from the acidification of the water by CO2 present in air.

Under favourable conditions, the reaction sucks up electrons from the diamond below. As electrons vacate the diamond they leave positive charge carriers - ’holes’ - behind, which are able to conduct.

The researchers demonstrated that the effect is not confined to diamond. It also occurs in single-walled carbon nanotubes, where conductivity is known to change when the nanotubes are exposed to air, and on the semiconductor gallium nitride.

’It seems that these thin films of water are everywhere and this effect is likely to be widespread,’ said Angus. ’I think that the important implication of this work is that it could account for some of the unpredictability of the behaviour of surfaces in certain environments. It opens up a whole new series of avenues for scientific investigation.’

Commenting on the work, Neil Fox of the CVD diamond group at the University of Bristol, UK, told Chemistry World, ’The effect reported in the paper offers some interesting insights into charge transfer processes occurring between a diamond surface and an aqueous phase. This may go some way towards explaining why some nanoparticle systems containing diamond or other wide band gap semiconductors behave in unexpected ways when cast into aqueous suspension.’